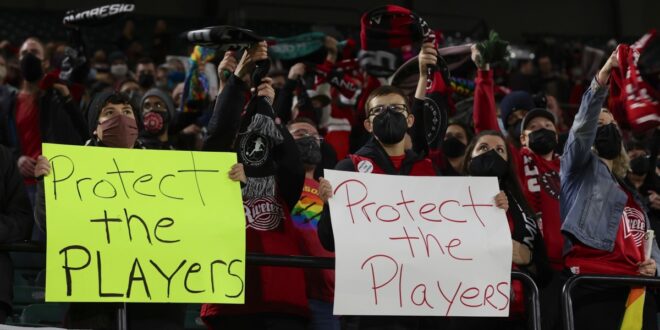 Following Monday’s revelation of the results from an independent investigation into the scandals involving systemic emotional abuse and sexual misconduct in the National Women’s Soccer League, players spoke out against owners who oversaw and allowed such abuse to take place.

The investigation, helmed by former acting U.S. Attorney General Sally Q. Yates and the law firm King & Spaulding, found that abuse throughout the league was “rooted in a deeper culture in women’s soccer, beginning in youth leagues, that normalizes verbally abusive coaching and blurs boundaries between coaches and players.”

“It’s my belief that when serious allegations are brought to you and you ignore us,” Angel City FC’s Sydney Leroux wrote. “You should have absolutely nothing to do with this sport ever again. Period.”

The investigation began after former NWSL players Sinead Farrelly and Mana Shim came forward with allegations of harassment and sexual coercion dating back a decade involving former coach Paul Riley. Their account was published by The Athletic in September 2021. Riley, who denied the allegations, was quickly fired as head coach of the North Carolina Courage, and NWSL Commissioner Lisa Baird stepped down.

It quickly became evident that Riley’s case was not an isolated incident. Five of the league’s 10 coaches in the league last season have either been fired or stepped down following allegations of misconduct.

One such instance involved Erin Simon, a former NWSL player who now plays in Europe. Simon told investigators that her former Racing Louisville coach, Christy Holly, invited her to watch game film with him and allegedly told her that for every pass she messed up, he was going to touch her. Simon told investigators Holly “pushed his hands down her pants and up her shirt.”

Farrelly, Shim and Simon released a joint statement decrying league leadership for allowing such routine abuse and misconduct for continuing, and for ignoring players’ complaints about wrongdoing.

“There have been too many years of inaction and too many empty promises made while players suffered at the hands of the league. No one involved has taken any responsibility for the clear role they played in harming players—not the teams, not the league, and not the federation,” the statement read. “They chose to ignore us and silence us, allowing the abuse to continue.

“It is time for action, accountability and change. Owners who have driven a culture of disrespect, who are complicit in abusing their own players, have no place in this league and should be removed from governance immediately. This will be the first of many necessary steps to finally hearing our voices and keeping our players safe.”

The report made numerous recommendations to prioritize player health and safety. Among them is the requirement that teams accurately disclose coach misconduct to the league and the soccer federation to ensure abusive coaches aren’t allowed to move between teams. It also calls for meaningful vetting of coaches and timely investigation into allegations of abuse.

U.S. Soccer said its board of directors and a leadership team would begin implementing the report’s recommendations immediately.

“U.S. Soccer and the entire soccer community have to do better, and I have faith that we can use this report and its recommendations as a critical turning point for every organization tasked with ensuring player safety,” U.S. Soccer President Cindy Parlow Cone said. “We have significant work to do, and we’re committed to doing that work and leading change across the entire soccer community.”