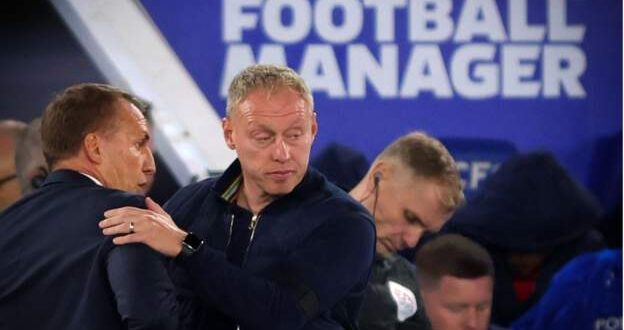 After Leicester boss Brendan Rodgers had seen his team thrash East Midlands opponents Nottingham Forest 4-0 to leapfrog them and move off the bottom of the Premier League, he said it had the potential to be a “season-changing game” for the Foxes.

The worry in the Forest camp is that the same could also be true for them – but in an entirely different way.

Whereas Rodgers can look forward with optimism, saying “tonight feels like the first game of the season,” for opposite number Steve Cooper it looks set to be a difficult few days.

Cooper spoke rationally and calmly about the position Forest find themselves in. “I am not thinking about my personal situation,” he said.

But the key question is not about Cooper. It is about what Forest owner Evangelos Marinakis is thinking. And what his response to seeing a team he invested so much in, emotionally and financially, on their top flight return, only for them to drop to the foot of the table after eight games will be.

There is no hiding the fact Cooper is in a difficult position.

Twenty-three players have come into the City Ground since Forest beat Huddersfield in that never-to-be-forgotten play-off final win at Wembley.

Some, such as Jesse Lingard, are yet to fulfil the investment made on them; others, like Lewis O’Brien, are struggling to adapt at the highest level. Both were replaced at the King Power Stadium but it made little difference as Forest slipped to the joint-biggest defeat of Cooper’s time in charge.

“The run of results is not good, I am not going to shy away from that,” he said.

“Tactically we were not what we planned to be. I didn’t like us in the duels. There are phases in games where we let the result run away from us.

“I refuse to be really critical of the players as a group. Don’t want to sound soft and fluffy. That is the last thing I am. It is tough for them. It is a unique situation. Relationships and connections are built over time. We are trying to do that on the job in the hardest league in the world.”

Cooper refused to talk about any fears for his job. He also dismissed a question over the significance of going to the 3,000-strong visiting support who sang his name during the second-half to applaud them at the end. But after five successive defeats the conversations about Cooper will happen, inside and outside the club.

Last month, Marinakis sacked former Huddersfield manager Carlos Corberan after only 11 games in charge of his Greek club Olympiakos. If he feels someone else can better manage the group he has assembled, as tough as that might be, he will act.

All Cooper can do is put on a brave face.

“The tougher it gets the more I work and the more it means to me,” he said. That is what leadership is. It is standing up and being counted and being a role model on the training ground. It is a poor run of results. The stats on chances and goals conceded are not good and we are trying to address it. But we are not giving up. This group of players care.”

For Leicester and Rodgers, the night was a good one. They may still be in the relegation zone but the manner of their biggest Premier League win since December suggests they won’t be there for long.

And the reaction of chairman Aiyawatt Srivaddhanaprabha, who flew in from Thailand for the game, a move viewed as significant, was overwhelmingly positive.

“It is always great to see ‘Top’,” said Rodgers. “He has been over before this season but more is made of it because he comes over now and you guys [media] put me under big pressure.

“He has been really supportive of me. They trust me in the role. That’s one of the reasons why I am still in the job and they expect me to take the team out of it [relegation zone] after what was a really difficult summer.”