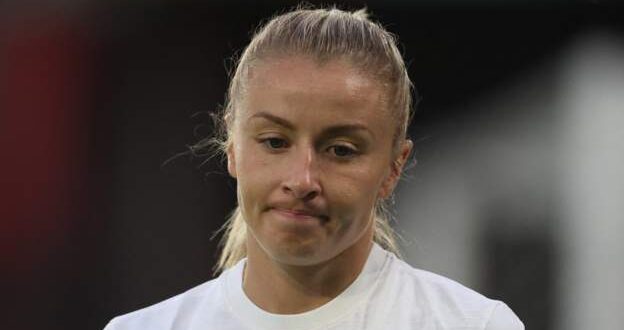 England captain Leah Williamson has been ruled out of the upcoming friendlies against the United States and the Czech Republic after sustaining an injury during training.

Nikita Parris and Lotte Wubben-Moy have been called up as replacements for Williamson and Lucy Parker.

“Williamson will leave the squad and return to Arsenal for rehabilitation,” said the Football Association.

Manchester United forward Parris, who has 17 goals in 69 England appearances, and Arsenal centre-back Wubben-Moy, who has eight caps for the Lionesses, were both part of manager Sarina Wiegman’s squad that won the Women’s European Championship this summer.

“Leah is a great leader and of course we will miss her,” said England forward Chloe Kelly.

“We have such great depth in our squad and so much strength. There are so many great leaders with experience, so it’s all about coming together in these moments where you do lose a player like Leah.”

The Lionesses take on world champions the USA on Friday at a sold-out Wembley before playing the Czech Republic at Brighton on 11 October.

Original Lionesses to be honoured at Wembley

Members of England’s inaugural team of 1972 attended the Lionesses’ training session on Tuesday.

The group will be recognised at Wembley as part of the senior team’s 50th anniversary, with more than 100 former internationals expected to attend and receive their England cap.

The first official England women’s fixture saw the team beat Scotland 3-2 in a friendly in Greenock on November 18, 1972.

Pat Davies was among the former players attending the training session and spoke of her excitement to receive a cap after being “ignored” for much of the past.

“It’s happening at last. It’s fantastic and I’m so excited. It has been quite hard, but we got there in the end,” said Davies.

The FA said it was committed to awarding former players bespoke caps during England’s victorious Euro 2022 campaign in July.