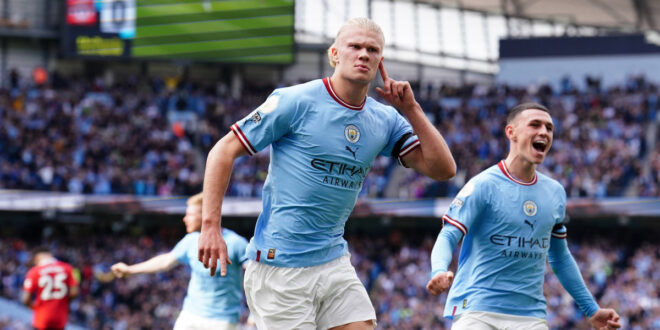 The Norwegian star scored two goals in a landslide, four-goal first half for Manchester City against rival Manchester United and added another in the second half for his third hat trick of the Premier League season. It also marks a hat trick in three consecutive home games for Haaland as City crushed United, 6–3.

The flurry of goals brings Haaland’s league-leading Premier League total to 14—double the amount of the next closest player (Harry Kane) on the league chart after only eight matches so far this season.

After Phil Foden already had given Man City an eighth-minute 1–0 lead, Haaland scored his first goal in the 34th minute when he shook his defender loose and headed in a Kevin De Bruyne corner.

Just three minutes later, Haaland was at it again when he latched onto a De Bruyne pass that was curled perfectly to the far post, marking the Belgian’s league-leading eighth assist of the season.

After Man City took a 4–0 lead into halftime, Haaland sealed his hat trick in the 64th minute with ease, steering a low pass past David de Gea to make it 5–1 for Man City.

Haaland wasn’t the only Manchester City star to record a hat trick on the day. Along with his early goal, Foden added one just before halftime and then recorded City’s sixth in the 72nd minute—both of which were assisted by Haaland.