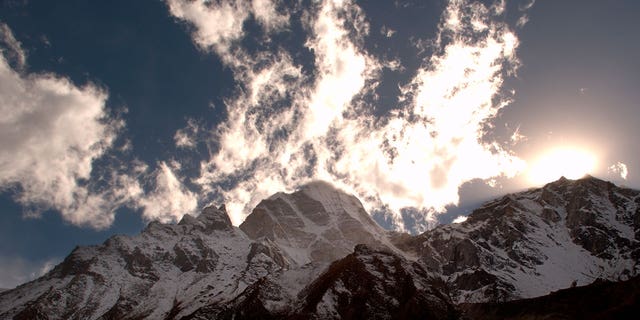 At least 10 trainee mountaineers died Tuesday after being swept away by an avalanche in the Himalayas in northern India, media reports said, as rescuers searched for 11 others missing.

A group of 29 people was hit by an avalanche on a mountain peak located in the Gangotri range of the Garhwal Himalayas on Tuesday morning, said Uttarakhand state police chief Ashok Kumar. He said rescuers pulled eight survivors from the snow and took them to a local hospital for treatment.

The Press Trust of India news agency reported 10 had died.

TERRORISM IN INDIA AND HOW IT AFFECTS US

All the missing were undergoing training at a mountaineering institute but far from the avalanche site, Kumar said.

A sunrise is seen above the mountains on the way to Gaumukh from Gangotri, Garhwal Himalayas, Uttarakhand, India.
(Bhaswaran Bhattacharya/IndiaPictures/Universal Images Group via Getty Images)

“It has happened for the first time in the history of Indian mountaineering that such a large group of trainee mountaineers has been killed in an avalanche,” said Amit Chowdhary, an official at the International Climbing and Mountaineering Federation and a former Indian air force officer.

Defense Minister Rajnath Singh said he was “deeply anguished” by the loss of lives in the avalanche.

“My condolences to the bereaved families who have lost their loved ones,” Singh tweeted.

Avalanches are common in the mountainous areas of Uttarakhand. Last year, a glacier burst in the state resulted in a flash flood that left more than 200 people dead.

Previous Abortion is the number one midterm issue for voters in Michigan, while Whitmer dominates in governor’s race
Next Fetterman previously said he didn’t want support from those who ‘cheer’ for Trump, hold opposing beliefs