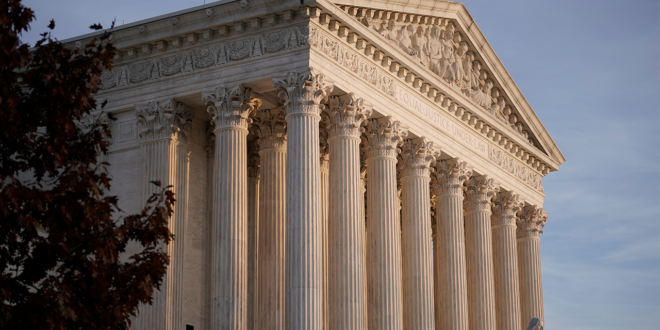 The Supreme Court begins its new term on Monday with two sets of oral arguments, the first for newly-appointed Justice Ketanji Brown Jackson.

The first case of the term is Sackett v. Environmental Protection Agency, a matter that could determine the scope of the EPA’s authority over wetlands under the Clean Water Act.

This is the second time that the case, brought by Idaho couple Michael and Chantell Sackett, is going before the Supreme Court, as the justices ruled in 2012 that the landowners could challenge an EPA order for them to cease building and to restore land they own that is adjacent to Priest Lake because it is considered “wetlands.”

Twelve years later, the Sacketts are back before the Supreme Court after two lower courts ruled against them. Now the justices will hear arguments over whether the Ninth Circuit used the proper test in determining whether the Sacketts’ land is protected by the Clean Water Act, which prohibits discharging pollutants into “navigable waters.”

The second matter before the high court on Monday involves 30 states challenging Delaware’s practice of claiming funds from uncashed MoneyGram checks. The state does this under the 1974 Disposition of Abandoned Money Orders and Traveler’s Check Act, which says that money “payable on a money order, traveler’s check, or other similar written instrument (other than a third party bank check) on which a banking or financial organization or a business association is directly liable” can escheat to the state where the instrument was purchased if the funds go unclaimed.

The challenge is based on the statutory interpretation of the term “money order.”

Other cases appearing before the Supreme Court oral arguments this term cover a wide range of legal issues.

Among the most high-profile subjects is affirmative action, which will be addressed in Students for Fair Admissions v. University of North Carolina and Students for Fair Admissions v. President and Fellows of Harvard College. Those cases deal with whether institutions of higher education can continue to use race as one of several “plus” factors in admissions, to achieve a diverse student body.

Another case pits free speech rights against LGBTQ rights. 303 Creative LLC v. Elenis involves graphic artist Lorie Smith, who seeks an exemption to the Colorado Anti-Discrimination Act (CADA), saying it would “force” her to design and publish custom wedding websites promoting messages that violate her personal beliefs. She also claims it would prevent her from posting on her own company’s website an explanation of those beliefs, specifically her opposition to same-sex marriage. The state says its law is being applied fairly to all businesses, which makes it illegal to refuse public services based on “disability, race, creed, color, sex, sexual orientation, marital status, national origin, or ancestry.”

Lower courts upheld CADA, while a previous Supreme Court case involving a baker who refused to create a cake for gay weddings went in favor of the baker but based on narrow grounds that do not necessarily indicate how the Court will rule in this case.