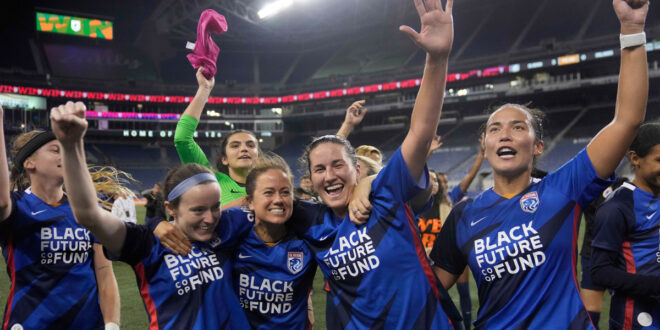 NWSL’s 22-match regular season is in the books, and after a wild home stretch in which teams jockeyed for playoff positioning and OL Reign wound up atop the table thanks, in part, to a slip-up by their bitter rival, the playoff picture for the league’s 10th season is set.

OL Reign and the Portland Thorns, whose blown 3–1 lead vs. last-place Gotham FC cost the club a third NWSL Shield in club history, have earned the byes and will host semifinal matchups. Should they both advance, they’d be on a crash course for a final rife with subplots.

If San Diego is to get to the semis, though, it must defeat a Chicago Red Stars side that finished as league runner-up a season ago and cemented its playoff berth with a win in the season finale against Angel City.

On the other side of the bracket, the Houston Dash reached the playoffs for the first time and will head to Kansas City for a clash with the Current, missing out on a home game only due to goal differential. Both sides split their meetings with OL Reign (each went 1-1-0), which may have a third Shield in club history but is still in search of a first league championship.

The playoffs will resume after the international break, during which the U.S. women’s national team will face England and Spain abroad. Of the 24 players Vlatko Andonovski has selected for that camp, half hail from NWSL playoff teams, and their clubs will watch closely in hopes of avoiding an injury that could dent their title hopes. Morgan, however, is not among them, being held out with a minor knee injury.

Here are the final standings for the six playoff teams and the schedule for the NWSL playoffs (all times Eastern).

Previous Liverpool have to go ‘back to the basics’ to improve form – Jurgen Klopp
Next Google Pixel launch event 2022: start time and how to watch