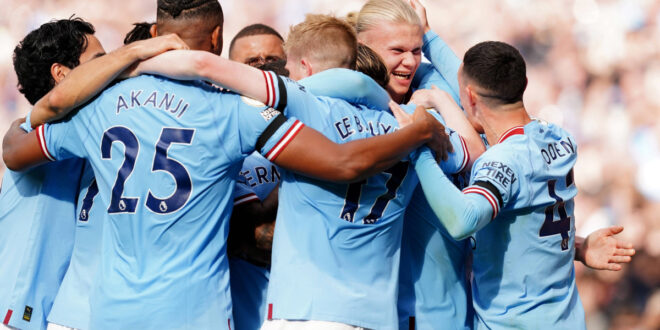 Four straight Premier League wins had raised Manchester United hopes. There was a feeling that maybe Erik ten Hag, by rowing back on his Ajax principles, could make United more competitive than had seemed likely in the first two games of the season. With Rodri missing from the back of midfield and Manuel Akanji paired with Nathan Aké at center back, there was a thought that it might be possible for United’s attacking pace to get at Manchester City. Within 10 minutes it was clear any United optimism was illusory: The gulf between City and United was 6–3 on the day and is eight points in the table, but it is light years in terms of quality.

City was embarrassingly better than United. The first half was comprised almost entirely of City attacks. If, for United, this wasn’t as bad as the 4–0 defeat at Brentford earlier in the season or the 5–0 home defeat to Liverpool last year, it was only because City was so obviously playing brilliantly. Phil Foden’s finish for the first, Kevin De Bruyne’s cross for the third, Erling Haaland’s arching pass for the fourth: All were stunning. This was City at the top of its game.

Not that United was blameless. It was dreadful, and being spooked by just how good City was isn’t really an excuse. From the moment after 70 seconds when Diogo Dalot was booked for a clumsy foul on Jack Grealish, United was clearly struggling. Sitting deep, it was just a punch-bag. By the time Foden gave City the lead in the eighth minute, sweeping in Bernardo Silva’s low cross, it already long felt overdue.

Christian Eriksen’s failure to track Foden’s run was simultaneously evidence of how punch-drunk United already was and indicative of the problem of playing the Dane so deep. That Casemiro had not been selected to make his first start had seemed puzzling from the moment the teams were released; at that moment, it looked inexplicable. He had, after all, been fit enough to start both friendlies for Brazil in the international break. Casemiro eventually came on just before the hour.

As İlkay Gündoğan hit the post with a free-kick and chance after chance went begging, the only shadow over City’s dominance was the thought that this might be one of those games in which City missed a lot of chances and ended up getting caught on the break. It was not.

With United continuing to give the ball away cheaply, the City pressure built and built until Haaland headed in a 34th-minute corner. Mystifyingly it had been Eriksen who ended up picking up the Norwegian as the corner was slung in. Zonal marking makes such things harder to arrange, but a matchup like that makes no sense.

At that, whether genuinely chasing the two-goal deficit or rattled out of its gameplan, United came out, and was promptly punished with two goals in transition. First De Bruyne shaped in a perfect ball to a stretching Haaland to jab in, then Haaland capped a rapid counter with a perfectly-arched cross for Foden. That made it five of the last 10 away league games in which United had conceded four or more, a record that suggests the depths to which United had sunk before the recent mini-recovery—and there was worse to come, not just in goals conceded but in the injury that forced Raphaël Varane off before halftime

That was only halftime. Antony did whip home a remarkable goal early in the second half, the returning Anthony Martial came off the bench to get a late consolation and then converted an injury-time penalty as the game lost shape, but there was never a serious prospect of a fightback. The only real question was whether either Haaland or Foden could follow Horace Barnes and Franny Lee in scoring a hat trick for City in a Manchester derby. As it turned out, both did: as many derby hat tricks for City completed in nine second-half minutes as there had been in the entire previous history of the fixture.

For Haaland, it was a third successive hat-trick at the Etihad and took his tally to a scarcely believable 17 from 10 games for City. Perhaps there is a way to stop him, but nobody has yet found it. And that is what makes City so unnerving: It still has all the build-up play and capacity to shape possession that it has always had, but it also now has a center forward of extraordinary physique and ability.

Even if it did let in two soft goals late on, City this season may be unstoppable; certainly United was nowhere near being able to do so.