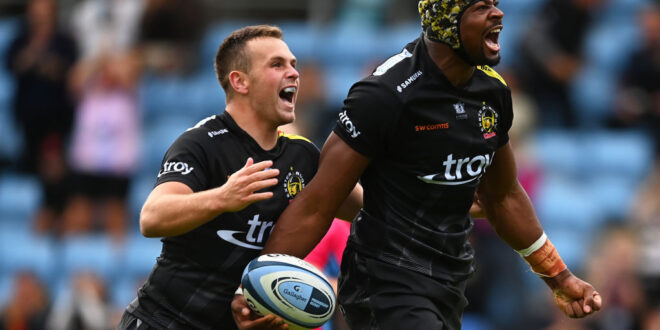 The analysts are the unheralded men and women of the rugby back-room staff. The amount of rugby they watch puts them in a unique position and they are experts on the game.

This season The Intercept is working with one of those analysts to give you a privileged look at the inner workings of the game of rugby. The ‘Secret Analyst’ works for an elite European club and will cast his eye over one of the tries of the month for Rugby World.

Here he looks at Exeter’s match-winning try against Harlequins in round three of the Gallagher Premiership.

It was a sensational match-winner, albeit that there was plenty of debate over whether the pass from Stuart Hogg to Patrick Schickerling in the build-up was forward. Referee Ian Tempest ruled that the pass was okay, the try stood and Exeter were celebrating.

It all started before the clock went red when Quins lost a lineout inside the Exeter 22 that would have secured the match. As the Secret Analyst says: “Most tries in rugby union across all leagues originate from the lineout. It would have been smart to bet on Quins scoring and stealing a losing bonus point from Exeter.”

That wasn’t the case, though, and Exeter stole possession and had 95m to go to win the game. What we don’t see in the clip above is just how long it took Exeter to really gain any forward progress. For eight phases they bounced around inside their own 22 before the first breakout by Christ Tshiunza on the far wing.

“On the eighth phase of Exeter’s attack from inside their own 22, we see Christ Tshiunza’s threat in the wide channel for the first time in this set, as Danny Care turns in his hips when defending on the edge. What went unnoticed is the work-rate and technical skill from Sam Simmonds to secure the wide breakdown – this is what coaches sometimes call a ’45 clean’, referencing the angle of clearout.”

This is where we catch up with the video above. Exeter have finally broken out and are on the verge of getting into the Quins half.

“After the third pass from the touchline, the Harlequins defence coach would be fooled into thinking they may be okay here, if the hit was made. However, some nifty footwork from Jack Nowell to beat the first man, accompanied by a two-handed offload from the deck, means they still have speed to attack from. The quick, two-handed, overhead offload from Slade to Hogg was brilliant, and to execute this in the 80th minute was a brilliant piece of skill.”

From here Exeter are once again away, this time on the near side with Stuart Hogg running free in space and replacement prop Patrick Schickerling on the outside.

“Hogg’s swerving run and brilliant dummy means he takes out both defenders, as Marcus Smith must step in to take the man and ball. You may think that Patrick Schickerling would be slightly lost and unnatural out on the edge, but he just manages to slam on the brakes and hold his feet enough for the pass to be deemed acceptable (sorry Quins fans!).

“We then see the flying mullet try to take Tyrone Green on the outside, and he does brilliantly with his second effort on the floor. This is an underrated skill when it comes to an individual’s carrying and breakdown qualities. Having that second movement buys the Exeter supporting players those extra couple of seconds, which are valuable to securing the breakdown.”

After that long period of time at the beginning of this possession where Exeter were scratching around in their own 22, they just covered half the pitch in two phases. But what do Exeter do now? After all, at their peak a few seasons ago the opposition 22 was their hunting ground. They could spend phase after phase in there just slowly chipping away before the inevitable try. That wasn’t what they chose here, though.

“They keep three forwards out wide and do what some teams would call ‘coast to coast’ after a line break. The thought process behind this usually is to keep speed of ball high and go from touchline to touchline exposing the narrow defence, as forwards congregate to the ruck.

“Jonny Gray’s width from the nine’s pass is perfect as he receives the ball opposite Harlequins’ fifth defender. Most defence coaches would like their third defender leading the defensive line speed opposite the attack’s first receiver. Gray’s width therefore takes out an extra couple of defenders.

“Olly Woodburn’s injection of extra pace makes Joe Marchant worried (with a tighthead prop inside him) and forces him to make a decision. For the second time in this attacking set, we see Tshiunza’s edge threat and explosiveness, which controversially puts the game to bed. In circumstances of desperation, we see the real value of keeping ball alive through offloading, the power of quick ball and maintaining width.”

It was a near perfect try built off those early phases where Exeter probed for space deep in their own half. Once they broke out, they continued the attack with those basics: keep the ball alive and attack at pace. Ultimately, it was too much for Quins.

Finally, what does an analyst do when they have won a game off a marginal call?