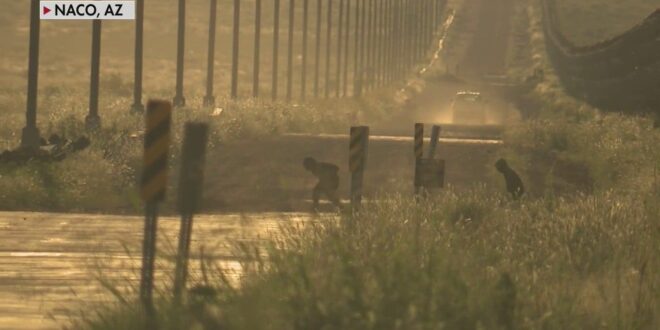 U.S. officials are aware of at least 599,000 migrants who crossed the southern border and evaded authorities in Fiscal Year 2022, a Customs and Border Protection source told Fox News.

These numbers represent those migrants have been observed on cameras or detected via sensors, footprints or other means, but were never apprehended because of a lack of manpower.

The number of gotaways in FY2022 – which spans from Oct. 1, 2021 to Sept. 30, 2022 – is up drastically from the year before. In April, Secretary of Homeland Security Alejandro Mayorkas told the House Judiciary Committee that there were 389,155 gotaways at the border in FY2021.

Migrants were seen running into the U.S. at the border in Naco, Arizona, in Fox News video.
(Fox News Channel)

In total, that makes for nearly 1 million gotaways at the southern border since the beginning of FY2021.

Far fewer gotaways came through before then. According to former U.S. Border Patrol Chief Rodney Scott, who served in office under former President Donald Trump and President Biden, Fiscal Year 2020 saw only 69,000 gotaways.

The situation has prompted Republican governors to bus and fly migrants deeper into the interior to “sanctuary” jurisdictions such as New York City, Chicago and Washington, D.C.

Former President Bill Clinton even acknowledged the problem on a recent CNN podcast.

“There is a limit to how many migrants any society can take without severe disruption and assistance, and our system is based much more on an assumption that things would be more normal,”Clinton said.

Bill Melugin currently serves as a national correspondent for FOX News Channel based out of the Los Angeles bureau.