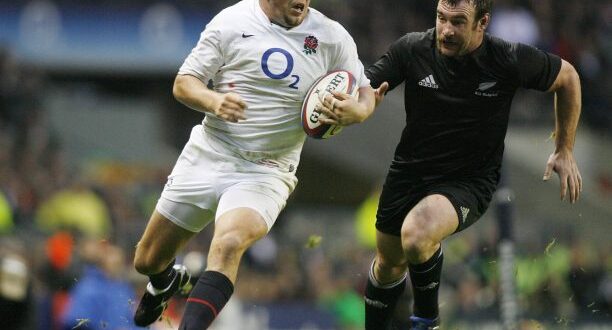 What’s it like living with dementia? The BBC spent over a year filming ex-England star Steve Thompson and his family – tune in on Wednesday to watch the programme

The plight of Steve Thompson, diagnosed with early onset dementia in 2020, will be highlighted to a mainstream audience on Wednesday 5 October with the screening of Head On: Rugby, Dementia and Me (BBC2, 9pm).

Rugby World recently met the England World Cup winner for an article published in our September 2022 edition. Here’s a reminder of that interview…

At times it was possible to forget that he has early onset dementia, a condition that has ripped his life asunder. Steve Thompson not only arrived bang on time for our rendezvous, at a hotel in Hartford close to his Cheshire home, but then spoke movingly and with barely a pause for two-and-a-half hours.

As Thompson has detailed in his powerful book Unforgettable, there are vast chunks of his rugby career that he cannot recall. It includes the whole of 2003 when England won the World Cup and Thompson was shortlisted for World Rugby Player of the Year.

Sir Clive Woodward says every other player in that victorious team was replaceable, even Jonny Wilkinson. Not so hooker Thompson, who played all 100 minutes of the final victory against Australia, despite the attritional nature of the front-row position. 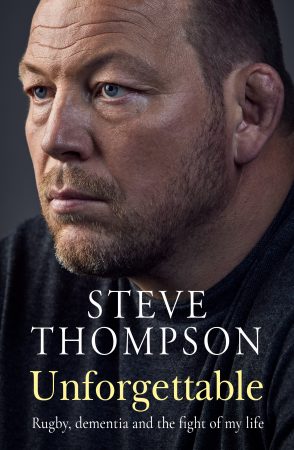 Thompson, 44, argues that the rugby authorities should have better protected him and many others from the effects of repeated collisions, that “concussion regulation was loose and muddled, not well delivered, and open to individual interpretation”.

He says he is incredulous at how slow the game is to learn and implement lessons, calling World Rugby’s decision in 2011 to reduce the minimum sit-out period from three weeks to six days as like putting down your umbrella in a downpour.

When he joined a concussion lawsuit alleging negligence by the RFU, WRU and World Rugby, he was subjected to horrendous abuse – “A lot of them were mums, wanting my kids to get run over because ‘you’ve ended my kid’s dream’” – but he says the changes he wants rugby to make will save the sport, not destroy it. Among his proposals is changing the word concussion to ‘traumatic brain injury’.

So what is it like interviewing someone with dementia? Actually, not too different. Some sentences trail off, or end in “and stuff”, and during our conversation we prompted him with the name of his ghostwriter (John Woodhouse), Rob Kearney and the Premiership Hall of Fame. At one point he tutted. “What is it called when you’re going to kill yourself?” he asked.

He’s better at remembering moments from long ago, like his teenage days at Northampton or the words to songs from the Eighties. He can relate how he egged on Manu Tuilagi to jump off the ferry at RWC 2011, but says: “I can’t remember being there but the story’s there because I’ve told so many people. It’s like my kids’ births. I know I was there because I speak to my friends. But now the memories are disappearing.”

He enjoys the black humour from his old Saints mates. “We’ve got a WhatsApp group and Hephs (Simon Hepher) sends pictures of everyone and when we turn up he’ll go, ‘That’s Mattie Stewart, who you played rugby with!’ Stuff like that. I’ll say, ‘Sorry, I don’t know him!’ That’s what I loved about rugby.”

He finds amusement, too, in his eldest daughter Seren’s attempts to wangle money from him, demanding a fiver if he fails to get her name right in three attempts.

At other times, there is no laughter. Dementia dominates his life. It causes mood swings and tantrums. It causes aberrations, as when he put empty saucepans in the oven last Christmas. It restricts his employment options; he was forced to quit a manual job with the water board for insurance reasons and now works for Medigold, a health awareness campaigner.

Not long ago, he did some reading for the audio version of his book and a guy at the recording interrupted him. “Steve, what are you reading?” he said.

Thompson explains: “I thought I was reading the book but by the time it was going into my brain and out my mouth it was different. That was a period where I thought I’d got as low as I could. Suddenly it’s, ‘I can’t do this, what’s going on?’

“So I went home and said to the kids, ‘When I read to you at night, am I reading the stories in the book?’ They said, ‘Oh sometimes you do, sometimes we just think you’re making it up.’ And I wasn’t. In my mind I’m always reading the book. I must admit I broke down a bit.” 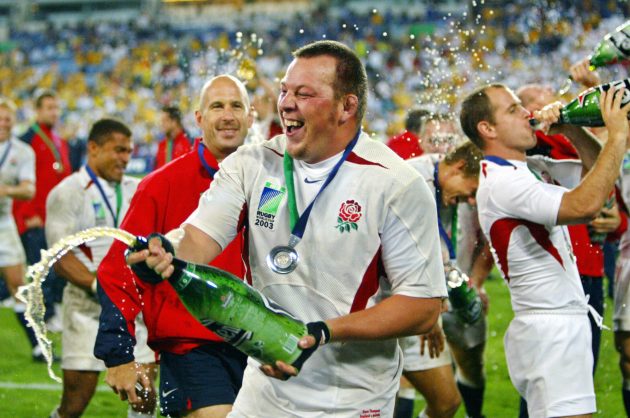 Champagne moment: celebrating England’s RWC 2003 triumph. He played all of the final (AFP/Getty)

It’s clear he adores his family, wife Steph and children Seren, Slone, Saskia and Saxon, all under the age of ten, and the guilt he feels at burdening them has led to suicidal thoughts. Notably when stood on a platform waiting for a speeding train to pass. He sings the praises of Gavin Newby, a neuropsychologist, in getting him on an even keel.

“I came close to killing myself a couple of times. I was in such a bad place that I didn’t know what to do. It got to a point where I couldn’t travel because I was going by train everywhere and just wanted to kill myself. I think it was the anxiety of leaving the family.

“Dr Gavin explained to me the battery analogy. It’s one of the things that changed my life. Remember the old batteries where you plugged them in for 12 hours and they would last for an hour? He said, ‘That’s your brain now. You’re trying to do so much’.” 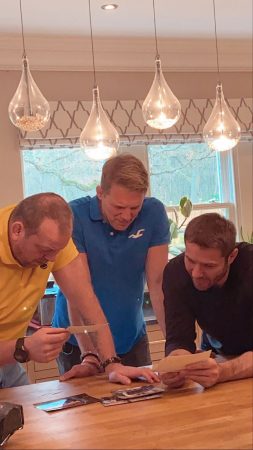 Thompson says he did nothing the day before this interview, so as to ‘recharge’ his brain. Afterwards, he was heading home to get a few hours’ kip. He has good days and bad days but there’s no predicting which it will be when he wakes up in the morning.

“I had pictures on the phone of the kids anyway and now I spray Steph’s perfume on my coat or on me and Dr Gavin said when you get onto the platform, face away, just look at the phone. Wherever I go I have my headphones on as well. Because it’s a mad feeling. It can just come on, ‘I don’t want to be here’. I hate it. But since I’ve been on the medication it’s been a lot better.”

Thompson has pledged his brain to the Concussion Legacy Foundation upon his death. The BBC has spent 16 months filming that documentary about his life. He says 175 players are part of the legal case, with former Wales captain Ryan Jones revealing his dementia diagnosis in late July.

Progress is being made in identifying and treating concussion, in tightening protocols and adapting laws to make rugby safer. But in the dynamic contact sport that rugby is, concussion – brain damage – is one issue that will never go away and Thompson is at the heart of it.