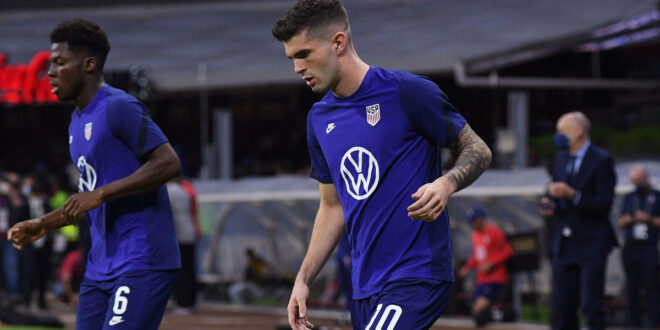 There’s one camp to go. There’s now one more chance to gather, train, plan and play before the World Cup begins. And one more opportunity for men with uncertain status to make their case.

U.S. national team coach Gregg Berhalter told the Associated Press last week in New York City that the list of 26 players he’ll take to Qatar is “about 85% settled.” That means there are four places undecided, give or take. The next two weeks could go a long way toward determining them, as well as helping Berhalter and his staff refine some of the tactics and rotations they’ll deploy in Qatar.

On Wednesday, U.S. Soccer unveiled the squad of 26 players that will contest upcoming friendlies against Asian World Cup qualifiers Japan (Sept. 23 in Dusseldorf, Germany) and Saudi Arabia (Sept. 27 in Murcia, Spain). The Americans will commence training in Cologne next Monday. Once this month’s international window shuts, the next time they’ll be together is in Qatar on Nov. 14.

There will almost certainly be some changes from this roster to that one, but not many (barring obvious and unpredictable issues like injuries). The core is established, and individual fitness and form likely will decide the final few places.

Berhalter is expected to reveal his World Cup team on Nov. 9.

“As we approach the World Cup, this is another opportunity for us to take a step forward as a group,” Berhalter said in Wednesday’s roster release. “We have a strong roster and can use these games as a measuring stick against World Cup opponents as we continue to gain valuable experience ahead of going to Qatar.

It’s another young team, averaging 24.55 years old as of the first day of practice. Only one participant in the past four World Cup tournaments has been below 25—Ghana in 2006 (24.51).

This month’s team features several likely World Cup inclusions who missed the four-game June camp, including Gio Reyna, Sergiño Dest and Chris Richards. Among the injured missing are goalkeeper Zack Steffen, who still seems to be locked in a battle with Matt Turner to start in Qatar, and left back Antonee Robinson, who’s vital to the U.S. cause.

Here’s a look at the full squad.

The race to wear the No. 1 shirt against Wales on Nov. 21 has become bogged down, to put it kindly. Turner, who seemed to enter the summer with a slight lead over Steffen, has played one competitive game in the past three months—Arsenal’s Europa League win at Zürich on Sept. 8. Steffen’s loan from Manchester City to Middlesbrough has gotten off to a stuttering start. He struggled early, then suffered a knee knock that sidelined him for the past four matches and forced him off the U.S. roster.

It remains difficult to imagine Berhalter choosing someone other than one of his two qualifying workhorses. But Steffen’s absence offers the coaches some additional time with the two candidates to be goalkeeper No. 3: Horvath and Johnson. Both have been starting regularly for their clubs.

Robinson’s injury, suffered in Fulham’s game at Tottenham Hotspur on Sept. 3, opens the door for Vines. The Colorado Rapids product, who’s now playing in Belgium, is the only other natural left back on the roster and now has a chance to stake his claim for a trip to Qatar. He hasn’t been called up to the U.S. since last November, but he’s been doing well at first-place Antwerp. Berhalter’s other option at the position is to try Dest, who’s better on the right, or Scally, who can play in multiple spots.

The most pressing defensive issue, apart from goalkeeper, facing Berhalter is who to start alongside Zimmerman in central defense. Long wasn’t convincing in his four June appearances (two starts) and may lack the speed to play the high line that U.S. coaches prefer. Richards is probably a better fit on paper, but he’s started just one game for Crystal Palace and hasn’t played for the U.S. since the January loss in Canada.

Carter-Vickers, who’s had a strong start to the season at Celtic, now appears to be ahead of Erik Palmer-Brown, Mark McKenzie and Tim Ream, none of whom were included this month, for the fourth center back spot.

This is the most settled position in the U.S. pool. Adams, McKennie and Musah are atop the depth chart, with Acosta serving as the primary defensive/holding depth.

Cristian Roldan may be slipping off the World Cup radar thanks to his less-than-ideal fit in Berhalter’s 4-3-3 and a recent groin injury. Meanwhile, time appears to have run out for CF Montreal’s Djordje Mihailovic, who earned a winter transfer to AZ Alkmaar but missed the June camp with an ankle injury. He hasn’t played for the U.S. since December 2020. Both de la Torre and Tillman have shown promise in more central, offensive roles.

The September spotlight will be on Pepi and Sargent, who are next in line to try to nail down one of the striker spots that’s been up for grabs for two years. Ferreira, who’s tearing up MLS with Dallas (18 goals), seems like the only certain World Cup inclusion among the competing No. 9s.

Sargent’s prospects were in peril in the spring, and he hasn’t played for Berhalter since last September. But the 22-year-old has been revitalized by more time in his preferred front-runner’s role and Norwich’s relegation to the English Championship. He has six goals in nine games after his strike on Wednesday—second in the league—and was named the club’s player of the month for August.

Form was always going to play a massive role in determining which forwards went to Qatar, and Sargent is in it at the moment.

Pepi, 19, will be hoping for a similar boost now that he’s on loan at Groningen. He had an assist on his Dutch debut last weekend.

Three notable omissions are strikers Jordan Pefok, Haji Wright and Brandon Vazquez. Pefok, 26, has handled his move from Switzerland to the Bundesliga’s Union Berlin relatively well, tallying three goals and two assists in six games. He missed a couple matches through injury but returned last weekend and started Union’s 1-0 win over Köln (where he missed a penalty kick). Wright, 24, took part in the June camp and has five goals in six games for Turkey’s Antalyaspor.

Vazquez, 23, has been an MLS revelation, scoring 16 goals in 29 appearances for FC Cincinnati. He’s been doing well at a position of obvious U.S. need. But he’s had no exposure to Berhalter’s system, having never played for the senior team. The manager might think it’s too late to introduce a new player to something he’s been building for three years.

“I’m not going to sugarcoat it,” Berhalter told The Washington Post two weeks ago. The lack of an international experience “does make it more difficult. It doesn’t make it impossible, though,” he said.

Among the wingers, Tim Weah will miss camp with the foot injury that’s delayed the start to his season at Lille. If healthy, he’s a lock for the World Cup. Both Arriola and Morris should have a chance this month to showcase their Qatar credentials.