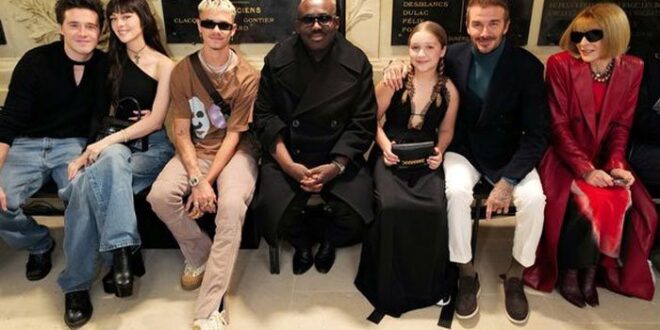 Nicola Peltz still has work to do to fix relationship with Victoria Beckham: Expert

The Transformers actor attended the fashion show with her husband Brooklyn Beckham following which the fashion designer could not hold back her tears seeing her whole family together.

However, body language expert Judi James believes that the Beckham family still has some healing to do following their public reunion.

“The fact that Brooklyn and Nicola showed up for Victoria’s show suggested in terms of an ‘intentional gesture’ or non-verbal PR bulletin that it was the clan re-united rather than a family divided,” James told The Mirror.

“There was a slight air of the Harry and Meghan about the way the Brooklyn and wife were already seated when David and his other children swept in like royalty, with David hug-greeting everyone warmly before getting to Nicola and Brooklyn.”

She went on to say that the way David met Brooklyn showed that the alleged fall-out has not affected their love for each other.

“The father/son hug was especially warm, with double-arm embracing that was elongated enough to suggest strong affection,” the body language expert said.

“Romeo’s hug of his brother was much cooler but that’s often just the way with brother,” she added.

While discussing Victoria’s show of emotion at the ramp, James said, “Victoria emerged at the end of her show to do the typical ‘shocked and full of modesty’ displays that designers do.”

“She did perform a crying ritual, with her hands covering her face at one point but was it at the sight of her entire family sitting in unity or was it just the normal happy tears hush that designers do at these points?

“It looked like the latter and, unusually for her, she skipped the one by one hugging of each member of her family and just honed in on David instead,” she analyzed.

James reached to the conclusion that Brooklyn and Nicola still have some work to do to fully amend their ties with the Beckhams.

“So it was a display of unity in terms of presence but so far without all the specific hugs and kisses to show that Brooklyn and wife are completely back in the Beckham bosom,” James shared.