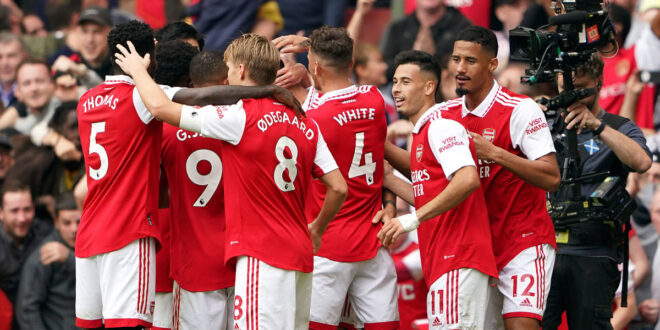 The question running through the start of this season for Arsenal was whether its lofty position was actually down to significant improvement or whether it had been flattered by the fixture list. A 3–1 win over Tottenham in Saturday’s North London Derby perhaps provided something approaching an answer—as well as ensuring Arsenal will end the weekend top of the table, no matter what happens in Sunday’s Manchester derby.

Last season, Arsenal won just three of 10 games against the rest of the Big Six. Its first game against a top side this season, away at Manchester United, provided ammunition for both sides of the debate. It played well in long patches, but still lost. There were few questions about ability, but major concerns about application. But in Saturday’s derby, under pressure, Arsenal found a resilience to go along with its pleasing attacking patterns.

If there is a question now, it is about Tottenham, with its unbeaten record gone. Yes, it is a far stronger opponent than the demoralized unit Arsenal beat in the same fixture last season, but Antonio Conte could really do with his side playing cohesively; getting results when playing poorly is only really of value if there is good form at the end of it.

The first half played out almost as a pastiche of pre-game expectations. Arsenal was vibrant and inventive. Its extra man in midfield allowed it to dominate the ball, and both Gabriel Martinelli and Gabriel Jesus caused chaos with runs behind Emerson Royal. Martinelli hit the post early on, and had it not been for some hurried balls into the box, Arsenal could have been commandingly ahead within the first quarter-hour. As it was, the opening goal didn’t come until the 20th minute, with Thomas Partey capitalizing on being gifted far too much space outside the box to sweep in his first of the season after a patient passing move.

But Arsenal, for all the fight it has shown in certain games this season, is not a side yet that can quite be trusted—as was apparent at United. And Tottenham is a side adept at making the most of the occasional counter. The first time Son Heung-min got a run at the defense, there was panic. His pass to Richarlison was overhit, but the Brazilian kept the ball alive and, after a cross toward Harry Kane had been half-cleared, he was felled by a needless lunge from Gabriel Magalhães. Kane clipped the penalty past his England teammate Aaron Ramsdale to become the Premier League’s leading goalscorer in London derbies.

Arsenal’s biggest hurdle, it has seemed for a number of seasons, is itself. It has not dealt well with adversity, which is why its record against the best sides is so poor. With little capacity to fight, a small differential in quality can lead to a big differential of outcome. Past Arsenals might have wilted upon Kane’s equalizer, but this side has shown hints this season that it is developing a backbone.

The second half began well for Arteta’s side, in part because of a Tottenham error, but the mistake came because of the pressure Arsenal exerted. It was Bukayo Saka who started it, cutting in from the right and hitting a low shot that Hugo Lloris parried. Rather than pushing the ball out of danger, though, he deflected it into the middle of the goalmouth, where it cannoned off Cristian Romero. Lloris perhaps should have dealt better with the rebound, but the ball slipped through his grasp and Gabriel Jesus pounced for his fifth goal of the season. Arsenal has won all four of the Premier League matches in which he has scored.

It was what followed, though, that was truly impressive. Arsenal controlled the game, was rather better at holding possession than it had been in the first half, and took a decisive grasp of the match when Royal was sent off for an ugly stamp on Martinelli after 62 minutes. Royal is a player who has divided opinion for some time but his supporters are dwindling by the day. He has always been a clumsy player, defined more by energy and effort than by subtlety, but he was badly exposed defensively by Martinelli, his foul seemingly born of frustration.

The third goal came five minutes later, Granit Xhaka, so improved this season in a more advanced position, capitalizing from another Martinelli surge. At that, the game was done, something Conte seemed to accept with a series of defensive substitutions apparently aimed at damage limitation and keeping players fresh for Tuesday’s Champions League match at Eintracht Frankfurt.

The 3–1 scoreline may have been the same as last season, but for Arsenal this felt a whole lot more impressive. Arteta might actually be restoring his side to the elite.