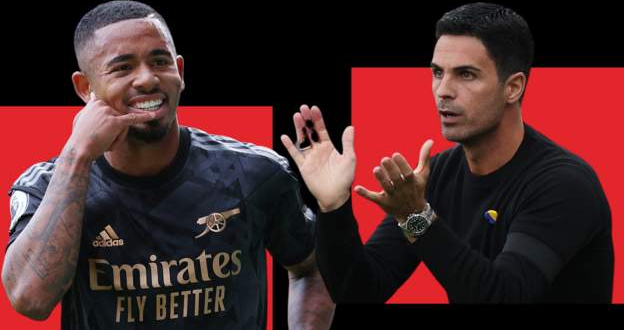 Arsenal: Are Mikel Arteta’s side really a lot better this season?

The Premier League returns this weekend with Arsenal top of the table after an impressive start of six wins from seven games.

Pundits such as Match of the Day’s Alan Shearer have singled out “game-changer” Gabriel Jesus as well as “a different mentality”, “hunger” and “desire” across the whole team.

A look at the stats show that Arsenal have already claimed eight more points this season than they did in the corresponding fixtures last term (when comparing results against relegated Burnley and Watford to those achieved against promoted sides Fulham and Bournemouth).

But with third-placed, unbeaten north London rivals Tottenham the visitors at Emirates Stadium on Saturday lunchtime, sceptics (and some Arsenal fans) may well highlight that the Gunners’ one match against the league’s ‘top’ eight sides, Manchester United, ended in defeat.

So, what is their good start down to and are they really a lot better this season? BBC Sport looks into the numbers. 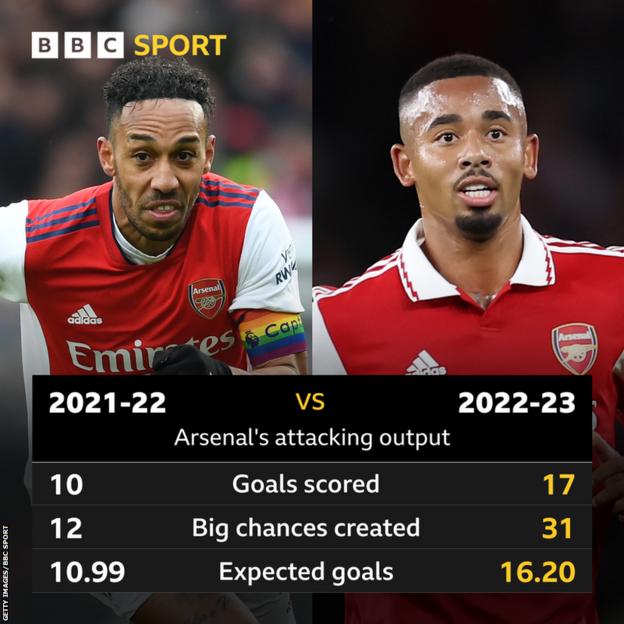 Arsenal are currently the third-highest scorers in the league with 17, behind only Manchester City (23) and Tottenham (18), and have improved by seven goals on last season’s equivalent matches – those against newly promoted sides have been compared with ones against teams relegated last season.

Mikel Arteta’s side are creating fewer chances – 116 shots compared to 131 at the same stage last year – but better quality chances.

Arsenal have created 31 ‘big’ chances, compared with only 12 last year in the corresponding fixtures, and could have expected to score 47% more goals than last season, according to data from Gracenote. They have been clinical, in fact scoring 70% more in those games.

“The 17 goals Arsenal have scored this term more or less matches the expectation of 16.2 which Gracenote’s model estimates. This is over five goals up on the expectation from the chances created in the equivalent matches in 2021-22,” said Simon Gleave, Gracenote’s head of sports analysis.

The signing of former Manchester City forward Gabriel Jesus has given them a consistent and ever-present threat up front, something which they have lacked during Arteta’s reign.

But one significant change could be the slight formation tweak which has seen midfielder Granit Xhaka pushed further forward.

The 30-year-old already has one goal and three assists in the league, bettering his record of a goal and two assists in each of the past three campaigns.

“Granit Xhaka is a player that we are finally seeing play like he plays for Switzerland,” former Gunners striker Ian Wright said on Match of the Day after their 3-0 win at Brentford earlier this month.

“He is playing in a position that suits him, playing more offensively. He is playing with authority and confidence.”

The addition of Jesus and a tactical tweak has also allowed Arsenal to press more effectively, with three of their goals – one against Manchester United and two against Leicester – coming after they retrieved the ball in the opposition’s half. 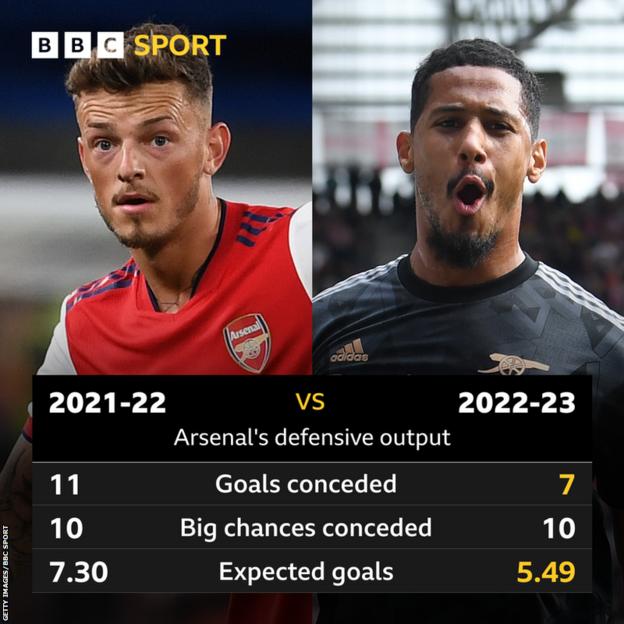 Arsenal leaked goals last season, conceding 48, giving them the eighth-best defensive record despite finishing fifth, while their goal difference of 13 was 16 fewer than fourth-placed Tottenham.

This season they have conceded just seven goals, compared with 11 in the equivalent fixtures last season, with only four sides having a better record at this stage and alongside that they are limiting opponents to fewer efforts – 7.6 per match, compared with 9.6 – with shots on target also down by 36%.

The Gunners are making 14.4 tackles per match compared with 13, albeit their average time in possession has decreased.

This season has seen the return of loanee William Saliba, with the 21-year-old France centre-back proving one of his side’s standout performers, while England’s Ben White has been shifted from the centre of defence to right-back. They have also been boosted by the signing of Oleksandr Zinchenko from Manchester City.

After the win at Brentford, somewhere they lost 2-0 on the opening day of last season, Alan Shearer said on Match of the Day that Arsenal “had a different attitude and different mentality”.

“There is a difference now in the hunger and desire,” added Shearer.

“They are a bigger team now. They’ve got characters who want to compete, don’t mind a scrap and don’t mind putting their head in where it might hurt.”

Is ‘game-changer’ Jesus the key factor? 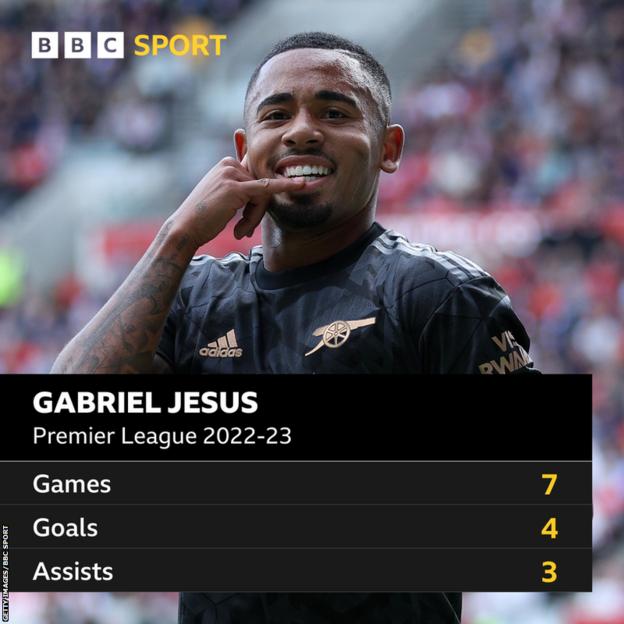 But is the key to success just as simple as having a scoring Jesus in your side?

His header at Brentford means he is unbeaten in 50 Premier League games (47 wins and three draws) when scoring. It is a run that is only bettered by James Milner (54 games – 43 wins and 11 draws).

Jesus has the second-best expected goals in the league behind his replacement at Manchester City, Erling Haaland, but is slightly underperforming with four goals.

Last season Arsenal didn’t have any players in the top 20 of Gracenote’s expected goals list, but Jesus is joined by Bukayo Saka (10th) and Gabriel Martinelli (13th).

“He [Jesus] is the game-changer,” said Shearer.

“He sets the tone from the front. Defenders hate forwards who are prepared to run in behind and make it hard for them. He is the one that sets off the closing down.

“Everyone will look at him and see he’s had that success at Manchester City and he wants to take that attitude into the Arsenal team – he’s made a huge difference.”

Arsenal have taken 77 points from their past 38 Premier League games, taking into account the end of last season and beginning of this – a total that would have seen them finish in the top four in nine of the past 10 campaigns.

It is a vast improvement on 59 points in the 38 before that and Arteta will be looking for his side to find the consistency to reproduce that over the course of this season.

Gunners fans will be hoping the early season form of Jesus, Xhaka and Saliba continues with aspirations to finish in a coveted Champions League spot for the first time since 2016.