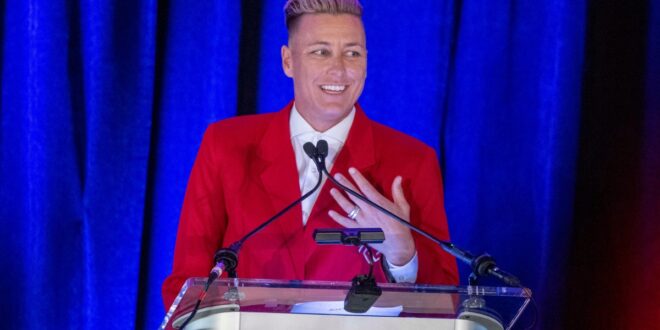 Former U.S. women’s soccer star Abby Wambach intends to fully divest from a concussion drug company that is backed by Brett Favre. The company is at the center of a Mississippi welfare fraud case involving the former NFL quarterback, she told ESPN in an email this week.

Wambach, a World Cup winner and two-time gold medalist with the USWNT, was a member of the sports advisory board for Odyssey Health, a drug company that has said it is developing a nasal spray to treat concussions. Favre is Odyssey Health’s top investor.

According to a lawsuit filed by the state of Mississippi, $2.1 million that was supposed to be given to welfare recipients was instead directed toward Odyssey Health. The company, previously known as Prevacus, was connected to the fraud case when arrests were first made in 2020, as reported by Anna Wolfe of Mississippi Today.

In an email Thursday, Wambach indicated she wasn’t aware of the “disturbing information” about Odyssey Health until ESPN reached out to her for comment.

“Minutes after learning this new information, I initiated the process to immediately and fully divest myself from any involvement—financial and otherwise—with Prevacus/Odyssey Health Inc., a process that I insisted be complete by end of day today,” Wambach said in the email.

Wambach did not respond to ESPN’s request for an interview or to questions about what her role on the advisory board entailed. She said in her email that she joined the board because she supported the company’s efforts to lessen the impact of concussion-related injuries.

“Since I genuinely believed this company was being transparent about a product that could spare the next generation of athletes from the severe impact of concussion injuries that I endured as a professional athlete, I am profoundly angry, disappointed, and saddened by what I learned today,” Wambach wrote.

The state of Mississippi has filed a lawsuit against Favre and several others to recover millions in misspent state funds that were intended to help individuals on welfare. The suit implicating Favre states the former quarterback used welfare money to fund a university volleyball arena at Southern Miss, his alma mater and where his daughter played college volleyball and beach volleyball.

Text messages obtained by Mississippi Today show Favre, former governor Phil Bryant, nonprofit founder Nancy New and former welfare agency director John Davis worked together to funnel at least $5 million of the state’s welfare funds toward the building of the stadium. In the texts, Favre reportedly asks New whether any money he’d received for the volleyball stadium can be traced back to its source by the media. New said no, saying she understands why Favre would be “uneasy about that.”

New has already pleaded guilty to 13 felony counts related to the fraud case in which nonprofit leaders misspent at least $77 million in money that was earmarked to aid those in need, according to Wolfe.

New is helping the prosecution as part of her plea deal and says she worked to help Favre at the instruction of Bryant. The messages also show that reportedly received a separate $1.1 million welfare contract to promote the program, with Favre offering to “record a few radio spots.” However, he did not do the radio appearances.

Favre has not been charged with any criminal wrongdoing and has reportedly repaid the $1.1 million. He said he didn’t know the money he received came from welfare funds.

Previous Arsenal: Are Mikel Arteta’s side really a lot better this season?
Next ‘Makes me cry to think about it’