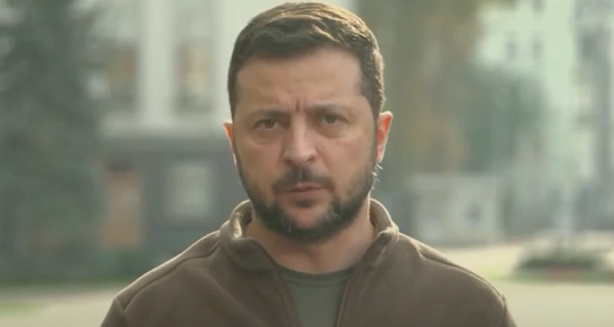 We now have reaction coming through from Ukraine’s President Vladimir Zelensky who spoke and followed the ceremony in Moscow in which Moscow claims occupied regions of Ukraine into Russia. Let’s listen in.

Today we’re here in the community of free nations we can see who is threatening us, who is prepared to kill us and Mamas who would not stop at any atrocity in order to expand their area of control. On the 24 February the first full scale strike was carried out against Ukraine. That was the first one. Russia was not stopping and would not have stopped on our borders had we not stopped it. Other countries would be jeopardized the Baltic States, Moldova, Georgia, Kazakhstan russia wanted to subordinate various nations of Europe and Asia just six months ago now this crime is stopped in Ukraine. It was stopped near Kiev and Chernihev, in Azolfstal, in Sumi region, in Harkie region, in Snake Island on Snake Island it will be stopped in Donbas and in the south of Ukraine when we liberate them and especially in Crimea, in a free Ukrainian Crimea all of our country’s territory will be liberated from this enemy. It is not just the enemy of Ukraine it is the enemy of life itself, of humanity, of law and truth. Russia knows this. Russia feels our power. You can see that here in Ukraine we are proving the strength of our values and this is why it is in a hurry.

It is staging this fast and annexation. It is trying to steal that which does not belong to it. It wants to kill, to torture, to blackmail and lie in order to rewrite history and redraw borders. Ukraine will not allow this. Today I held a meeting with the Staff of the General Staff and the Commander in Chief, the Security Council of Ukraine. We have decided first only by strengthening Ukraine and chasing the occupiers from our territory shall we return to our borders. We will cover this road only through negotiations. We will return to negotiations. Ukraine has always proposed negotiations on fair terms but clearly this Russian president we can’t deal with him. He does not know what is humanity and honor. Therefore, we are prepared for a dialogue with Russia but with a different President of Russia. And third, we must confirm legally everything we have achieved in reality in Ukraine. It is in Ukraine that the fate of democracy is decided in confrontation with tyranny. It is here, within the state borders of Ukraine that we can confirm the strength of the borders of all European countries. We can guarantee that nobody will dare to return tyranny to our continent.

It is here that the values of our Euro-Atlantic community have been revived by people that are fighting for freedom and with other nations that help us in the struggle. We are real allies with NATO. We have covered this road to NATO and in actual fact, we have proven that we are compatible with the standards of the alliance, they are really on the battlefield, in every aspect of our cooperation. We trust one another, we help one another and we are protecting, and defending one another. And that is our alliance. This is an actual alliance. Today, Ukraine is making so, President Zelensky.

Announcing that Ukraine is formally applying to fast track its membership of the NATO military alliance. That’s it for the news this hour, but there’ll be more updates at the top of the hour with Nick Clark after the stream. Thanks for watching.

Previous Bayern Munich vs. Bayer Leverkusen: Picks, predictions, how to watch Bundesliga match
Next Library of Congress explains why it hosted Jackson investiture but not for Gorsuch, Kavanaugh, Barrett