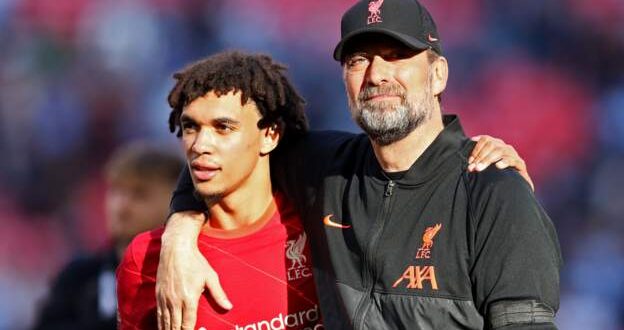 Jurgen Klopp would pick “exceptional” Trent Alexander-Arnold in any team after the full-back was overlooked by England manager Gareth Southgate.

The Liverpool defender, 23, did not figure against Italy and was dropped from the squad that drew with Germany.

Reds boss Klopp says there is “space for improvement” in Alexander-Arnold’s defensive game, but his offensive ability is “so extreme”.

“My point of view, it’s an easy pick. Whichever team I would coach in the moment, I would sign him because he is exceptional.”

Southgate has said he feels Alexander-Arnold’s “all-round game” is behind that of right-back rival Kieran Trippier.

Alexander-Arnold, who missed last year’s European Championship through injury, has made just one international appearance this year.

He has been a key player for a Liverpool side that has won the Premier League and Champions League in recent years, but he has struggled to transfer that form to international football and has won just 17 caps since his 2018 debut.

“You really want to open this box?” said Klopp.

“We are fine here because it’s completely different because I see him differently. It’s obvious.

“There are stories out there all the time that talk about him and say he’s not a good defender, but that’s not true.

“He is a good defender. He doesn’t always defend good, that is true as well, but that is what we’re working on – he is a young player, he is 23.

“There is space for improvement, definitely, but we only discuss it on the level we discuss it because his offensive impact is so extreme for us. It could be for each team in the world.”

‘Alexander-Arnold was not in party mood on return’

Southgate prefers to start with Chelsea’s Reece James, who can also play as part of a back three, with Trippier as back-up, making Alexander-Arnold’s chances of being in England’s World Cup squad increasingly slim.

But Klopp believes Alexander-Arnold could still find a way to prosper in the current squad, and has no concerns about his player’s response to his latest England setback.

He added: “Trent came back and was not in a party mood, but he just accepts the decision of the manager as well because he understands football pretty well.

“He is an extremely smart boy and in football you cannot offer more than you can offer.

“England is obviously blessed with a lot of really talented players in a similar position and it’s difficult to line them all up together.

“In this case, it could work. Reece James can play in a three in the back, and that would be interesting to see how they could interchange positions.”