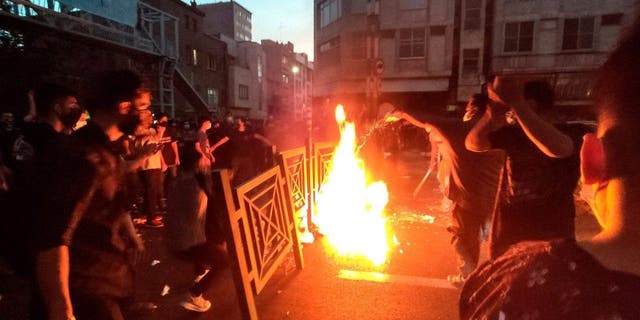 Iranian protesters spoke exclusively to Fox News Digital to express their outrage against the Islamic regime in their country as well as the desire to remove Ayatollah Khamenei as supreme leader of Iran since the man “does not represent the people.”

“We wanted to demonstrate not only to the regime but also want people the world over [to know] — the Iranian people reject this regime, and they want it overthrown,” Mashhad, a 42-year-old teacher in Iran, explained.

“Our ultimate goal and ultimate desire and demand is the overthrow of the regime in its entirety, and we are very, very determined to bring this about,” she continued. “We want our voices to be heard, and I assure you that we will bring down this regime. We have absolutely no doubt in our minds that we can do it.”

Protests started at the funeral for Mahsa Amini, 22, after her death while in the custody of the morality police, who claim that she merely fell into a coma following her arrest. Her family and some witnesses instead said they saw evidence that the police had beaten her.

As of Thursday night, the protests reportedly spread to 164 cities, with 300 people killed and 15,000 more arrested, according to the People’s Mojahedin Organization of Iran (MEK). Fox News Digital could not verify these numbers, but other outlets have reported at least 100 cities with protests and dozens dead as of this week.

Protesters in downtown Tehran make fire and block the street during a protest over the death of a woman who was detained by the morality police.
(Associated Press)

Iran has seen an increasing number of protests over the past few years, but the protests that started with Amini’s death feel different to the citizens — both in scope, with women taking a more prominent role, and in the severity of the regime’s response.

“It was much, much harsher, much more severe,” said Reyhaneh, 19, from Tehran. “Not only in the numbers of the forces they had — the morality police, security force, plainclothes agents and others — but also their treatment. They were very vicious, very brutal, much more brutal before.”

“What I have seen the last two days in Tehran, they have risen up. I myself have taken part in these protests … what I have seen is exemplary bravery and courage, especially because the uprising is being led by women,” she added.

“We wanted to demonstrate not only to the regime but also people the world over: the Iranian people reject this regime.”

The women spoke to Fox News Digital after Iranian President Ebrahim Raisi spoke before the United Nations General Assembly. Raisi allegedly helped carry out the 1988 “death commission” that led to the deaths of thousands of political dissidents.

Mashhad asked why Western governments allowed Raisi to speak to the U.N. and did not show they were “standing with the people of Iran.”

“Where is … freedom and support [in] supporting this criminal? And [has] the blood of thousands on his hands, especially in 1988, the massacre,” she said. “Why don’t they … prosecute him and hold him accountable?”

Mashhad first joined protests two years ago, but she feels this one is different because people have seen how “shameless” the Ayatollah and his regime are, leading to people of many ages and backgrounds across the country to take to the streets.

Reyhaneh said there are examples of previous protests that led to regime change and that the people have no reason to believe this one can’t be same.

“We in our struggle … have put our lives in our hands, willing to sacrifice our lives, and we will fight to the very end to bring about freedom in Iran and already dramatic fundamentalism,” she said.