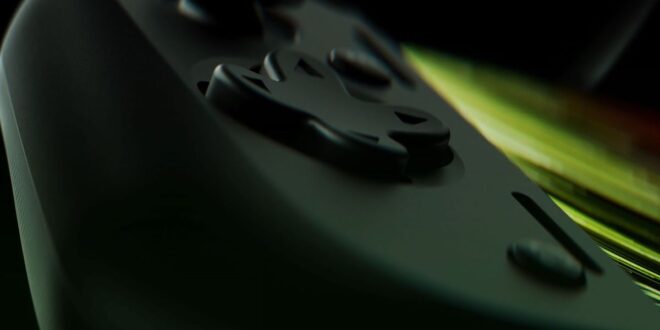 Verizon teases a ‘5G gaming handheld’ made by Razer

Verizon is teasing that it’s working on a 5G gaming handheld with Razer and Qualcomm, which is set to be fully announced on October 15th at RazerCon. The carrier talked a little about the device, which will be called the Razer Edge 5G, at a keynote at MWC Las Vegas, saying that it’ll run Android and give you access to cloud gaming services like Xbox Cloud Gaming. Unlike devices like Logitech’s recently announced G Cloud, however, it does seem like it’ll be able to play games stored locally on the device as well.

While details are relatively sparse, we have heard of a similar device before: Qualcomm’s Snapdragon G3x Handheld Gaming Developer Kit. That device, which was shown off late last year, was made to showcase the company’s G3x platform, which is what Verizon and Razer’s handheld will be using. According to Qualcomm, its G3x chipset supports external displays up to 4K and has a GPU capable of running games at up to 144 frames per second.

Based on the teaser video, it seems like the Edge 5G may have some sort of adaptive trigger system. Design-wise, it looks like the company’s Kishi V2 controller — except instead of a place to slot your phone into, the computer and screen are built-in.

Obviously, the elephant in the room is the Steam Deck, which can both stream games and play PC games very competently on its own. Letting you access a good chunk of the Steam library is a big advantage of Valve’s handheld, one that Razer’s likely won’t have given that it’s running Android instead of SteamOS. However, the Steam Deck starts at $399 and can only do Wi-Fi, not 5G, so there’s some room for Razer and Verizon to play with here; if the handheld comes in around $250, it could be compelling to the same types of people who bought the Nvidia Shield handheld.

Verizon’s consumer chief operating officer, Krista Bourne, said she wasn’t allowed to give me more detail than what was teased onstage — that meant details about pricing or what exactly Verizon’s role in the handheld was. We know it’ll be able to access 5G ultra wideband in some way, which could provide for fast downloads and even let you stream more casual games, but it’s unclear whether it’ll be exclusive to Verizon’s network. It’s likely we’ll have to wait for Razer’s official announcement for more details.