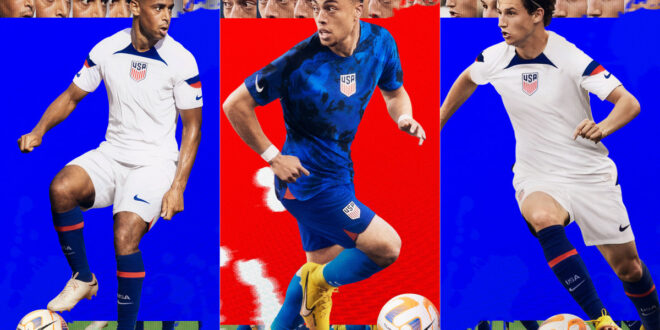 Having already been seen (and criticized) by many U.S. fans following several weeks of leaks, Nike’s new national team uniforms finally were unveiled by U.S. Soccer and its supplier early Thursday morning.

Both the American men and women will wear the kits, starting with this month’s USMNT friendlies against Japan and Saudi Arabia. The women likely will play in them for the first time on Oct. 7 when they meet England in London. The uniforms then be seen across the globe when the men face Wales, England and Iran at the Qatar World Cup in November.

It will be the sixth time the U.S. men are outfitted by Nike at a World Cup, dating back to France ’98. The primary jersey released Wednesday is the traditional white, which has been the color of the U.S. “home” shirt in every World Cup since 1994, when the hosts sported Adidas’s iconic “denim kit.” In photos distributed by Nike, the new white jersey is accompanied by plain white shorts and royal blue socks (the women are shown wearing white-blue-white).

According to Nike, the minimal design flourishes on the white jersey are supposed to evoke other popular American team sports. The company’s logo is on each sleeve rather than the right breast, and so is intended to reflect American football jerseys. The centered U.S. Soccer crest is “akin to basketball jerseys,” Nike said, while the shoulder and sleeve seams are supposed to resemble those found on hockey uniforms. The sleeve stripes “allude to classic striping detail found across American sport,” Nike said, while the larger blue placket under the collar is part of a template used in several countries’ kits, including the Netherlands, Australia, Nigeria and China.

The new blue jersey is inspired by “design techniques found throughout the American fashion and streetwear industry,” according to Nike.