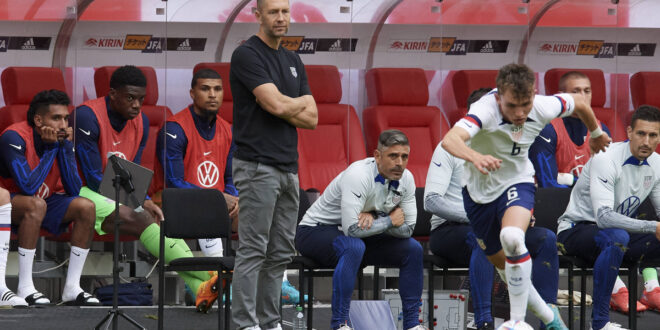 The U.S. men’s national team is one game away from the 2022 World Cup, and it comes Tuesday against Qatar-bound Saudi Arabia.

Gregg Berhalter’s side is coming off a concerning 2–0 loss to Japan on Friday in which the USMNT failed to record a shot on target. The U.S. looked disjointed, played with a lack of urgency and seemed unprepared for the challenge Japan brought to Germany, and there will be a lot of eyes on Tuesday’s friendly at the Estadio Nueva Condomina in Murcia, Spain.

After missing out on the Japan game due to a knock picked up in training, U.S. star Christian Pulisic will start against Saudi Arabia. Berhalter confirmed that forward Ricardo Pepi, who was recently loaned to Dutch side Groningen and scored his first goal in nearly a year, will start alongside Pulisic.

Tuesday’s match will also be the last chance for fringe players to prove themselves before Berhalter announces the World Cup roster on Nov. 9. While the U.S. will play Iran, England and Wales at the World Cup, Saudi Arabia also faces a tough group that features Argentina, Mexico and Poland in Qatar.

The U.S. has won three of six games against Saudi Arabia, although the last time the two sides faced off was in 1999 at the Confederations Cup when Berhalter started at center back.

Pulisic already made his presence felt in the first seven minutes, setting up a couple of chances including a beautiful passing sequence that sent Weston McKennie towards goal before the Juventus midfielder was called offside.

After going the entire Japan match without a chance on goal, McKennie logged a shot on target in the ninth minute after Walker Zimmerman sent a pinpoint pass from the backline that met McKennie’s run. However, the Texas native’s shot went straight toward the Saudi Arabian keeper.

Stay tuned here for live updates and highlights of goals and key plays from throughout the match (refresh for most recent updates).

Here are the lineups for both sides: