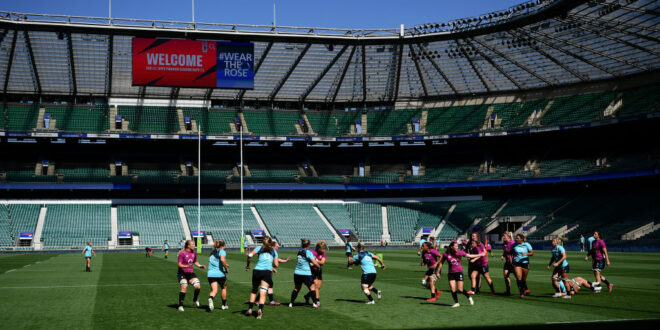 England Women will play their first standalone fixture at Twickenham in 2023 – and you could be there!

The Red Roses will play their first standalone fixture at Twickenham next year.

All previous matches the England women’s team have played at the stadium have been scheduled alongside men’s fixtures, but that will change in 2023.

England’s Women’s Six Nations match against France on ‘Super Saturday’, 29 April 2023, will be staged at Twickenham. Looking at recent championships, the match is also likely to be the title decider.

Last season’s Women’s Six Nations saw several new spectator records set and the hope is that this match at England Rugby’s HQ will be another step towards a capacity crowd at Twickenham for the Rugby World Cup final in 2025.

“To have a standalone Red Roses fixture at Twickenham Stadium is exciting and a real marker of where the game is at,” said Red Roses coach Simon Middleton.

“We know there are some big targets to sell out the stadium at the 2025 World Cup and it’s great we have the opportunity to draw a big crowd two years out.

“Games against France are always great occasions and contests and I expect this one to be no different.”

The venues for the Red Roses’ other home matches in the Six Nations have also been confirmed, with Newcastle Falcons’ Kingston Park hosting England v Scotland on 25 March and Franklin’s Gardens – home of Northampton Saints – staging England v Italy on 2 April.

Tickets for all three of the Red Roses’ home matches in the 2023 Women’s Six Nations are on sale now via the RFU website.

For a limited time, there is an ‘early bird’ rate for the Twickenham fixture, with tickets from £15 for adults and £5 for children.