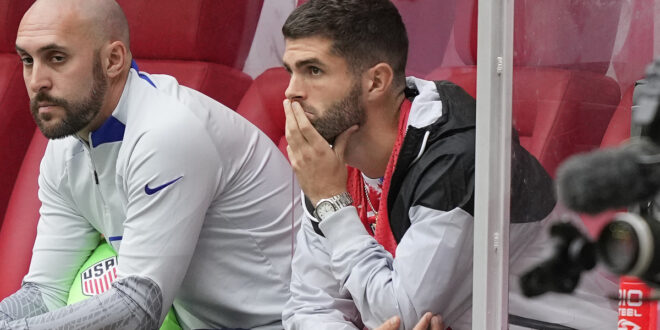 🇺🇸 Another shutout for the USMNT

🏈 How Ryan Griffin has lasted 10 years in the NFL

🗽 The Yankees wrap up the division

So much for a World Cup tune-up

The U.S. failed to score in either game, losing to Japan 2–0 Friday and playing to a 0–0 draw against Saudi Arabia yesterday. The team won’t get together again until it meets in Qatar in November for the World Cup.

The lack of offensive firepower is the biggest concern. The U.S. is 2-1-3 in six games after clinching a spot in the World Cup in March and has been shut out three times in that span. A 3–0 win against Morocco on June 1 is the team’s only win against a Qatar-bound side since beating Mexico last November.

That’s due in part to manager Gregg Berhalter’s struggle to find a reliable striking option. Ricardo Pepi, now 19 years old, looked like the answer after he scored three goals in his first two international appearances last year, but Berhalter has recently given more playing time to Jesús Ferreira, a 21-year-old who plays for FC Dallas. Other options include Josh Sargent and Jordan Pefok.

Picking the right group of strikers is a difficult challenge for a manager, and Berhalter’s decision may be less about who’s playing the best club soccer and more about who has the right attributes to fit his vision of the team, Brian Straus writes:

Form is typically temporary, especially up top. Strikers can be streaky, for better or worse. What seems to matter more to Berhalter is profile—attributes, qualities, abilities and instincts that transcend a given stat. How the player fits into the group tactically, physically and personally is a priority.

But there are two pieces of good news for the USMNT. First of all, the Americans won’t have to rely solely on their striker for goalscoring. When healthy, Christian Pulisic and Timothy Weah are more than capable of creating and scoring from the wings. Second, and more important, the three opponents the U.S. will face in the group stage in Qatar aren’t playing their best soccer, either. I’ll let Straus run down the results:

In addition to the Americans’ less-than-convincing display this month, neither England nor Wales is in World Cup form. The Welsh are 0-4-1 over their past five games, 2-5-2 this year and just suffered relegation from UEFA’s Nations League A. England is also going down after an 0-3-3 stretch that ended with Monday’s 3-3 draw with Germany, during which the Three Lions blew a late lead and scored their first goal from open play in more than eight hours of game time. Iran, meanwhile, changed coaches just three weeks ago, reappointing Carlos Queiroz. The veteran Portuguese manager led Team Melli from 2011 to ’19 and replaced Dragan Skočić, who was fired in July despite guiding Iran to an 8-1-1 record in the final round of Asian World Cup qualifying.

But don’t put too much stock in how the teams are playing right now. We still have about two months to go until the U.S. opens its World Cup against Wales on Nov. 21. A lot can change between now and then.

[A]fter a decade in the league Griffin has learned how to make himself useful in other ways, too. [Cameron] Brate recalls Griffin organizing walk-throughs for several former Bucs running backs who were struggling to grasp the playbook’s blitz protection packages, even tapping assistant coaches to stand in for the defense. More recently, as receiver Chris Godwin rehabbed a torn ACL suffered last winter, it was Griffin who woke up early to lend his arm for Godwin’s 6 a.m. workouts. “After practice he’s the first guy to stay and throw to people who want to run routes,” Brate says. “This year he’s even playing scout safety for us.” Naturally, when Brate and his then-fiancé-now-wife Brooke were deciding on an officiant for their wedding this March, guess who they picked? “Couldn’t think of a better person to help us out.”

With Geoff Collins out, Richard Johnson argues that it’s past time for Georgia Tech to hire its first Black football coach. … The Phillies have a history of collapsing in September, but Tom Verducci thinks they have what it takes to finish strong this year. … Andrew Brandt explains why Jalen Hurts is the most undervalued player in the NFL.

The Yankees clinched the AL East, but Aaron Judge is still stuck on 60 home runs. … The Browns provided an update on the injuries Myles Garrett suffered in a car crash. … Several former Baylor players spoke out after Kim Mulkey declined to comment about Brittney Griner’s ongoing detention in Russia. … Dolphins special teams coordinator Danny Crossman didn’t think the butt punt was very funny. … Marlins reliever Richard Bleier became the first pitcher since 1900 to be called for three balks in the same at-bat. … Giants receiver Sterling Shepard’s season has ended prematurely due to injury for the second year in a row.

3. Lionel Messi’s long-range goal against Jamaica. Some guy ran on the field after the goal and attempted to have Messi sign his bare back with a marker.

On this day in 1919, the Giants and Phillies played the fastest nine-inning game in MLB history. How long did it take to play?

Yesterday’s SIQ: What was the final score when the Giants beat Washington on Sept. 27, 1942, without recording a first down?

Answer: 14–7. It was the only loss of the season for Washington, which went on to beat the Bears in the NFL championship game.

The box score is incomplete (it doesn’t include individual stats or a play-by-play), but it is still hilarious. Washington outgained New York 233–51, although even that obscures just how hapless the Giants’ offense was. They ran the ball 26 times and gained only one yard. The rest of the offense was a 50-yard touchdown pass from Tuffy Leemans to Will Walls. It was the Giants’ only pass attempt of the day. The other touchdown was a 66-yard interception return by Neal Adams.

If you’re wondering why the Giants didn’t try to air it out a little more after getting repeatedly stuffed in the running game, it’s probably because they didn’t employ a true quarterback. Leemans, a Hall of Famer, was a fullback by trade, though he was the team’s leading passer that year with 555 yards on 35 completions. (He was the team’s leading rusher and passer in 1941.) He was a far cry from his Washington counterpart, Slingin’ Sammy Baugh.

This appears to be the only game in NFL history in which a team failed to record even a single first down and still won the game. (A search of Sports Reference’s database brings up hundreds of results for games where a team won with zero first downs, but that seems to be due to incomplete data.) Incredibly, 51 yards of total offense is not the most pitiful showing by a winning team in NFL history. In 2002, the expansion Texans beat the Steelers in Pittsburgh despite recording just 47 yards of total offense. The final score was 24–6, thanks to three defensive touchdowns for Houston. But even they managed to record three first downs.

In 1989, on the eve of the NFL draft, Michigan State offensive lineman Tony Mandarich appeared on the cover of Sports Illustrated shirtless, flaunting his hulking but chiseled physique. “The Incredible Bulk” was the headline, followed by a subhead declaring him “the best offensive line prospect ever.” Three years later he was back on the cover, but the headline struck a different tone: “The Incredible Bust.”

The Packers took Mandarich with the No. 2 pick in 1989, ahead of guys like Barry Sanders, Derrick Thomas and Deion Sanders. While those players went on to have Hall of Fame careers, Mandarich quickly washed out of the NFL.

“A lot of people would have bet their bottom dollar that I would have been in the Pro Bowl three times by now,” he told SI’s Jill Lieber in that 1992 cover story, “but instead I’m known as one of the biggest busts in football. Day after day there are articles ripping me. I try not to read them, but when teammates say, ‘Man, did you see what they wrote about you today?’ then I’m curious. If you keep reading about what a bust you’ve been, after a while you start to believe it. The truth hurts.”

One reason Mandarich struggled in the NFL is he simply wasn’t as strong as he was at Michigan State. An unnamed Packers player told Lieber that Mandarich had admitted he quit using steroids due to the NFL’s random testing protocol. Then, during the 1992 offseason, he lost 30 pounds as the result of a parasitic infection contracted from drinking from a stream on a hunting trip in his native Canada. During a preseason game later that summer, Mandarich was concussed. As the effects lingered, he was diagnosed with post-concussion syndrome and missed the entire season. His contract expired at the end of the season, and he wasn’t picked up by another team.

After washing out of the NFL, Mandarich, who had been usingabusing painkillers and alcohol while with the Packers, went to rehab. He was signed by the Colts in 1996, eventually becoming a starter in ’97 and ’98.

In 2009, Mandarich was featured in the pages of SI again—as a changed man. That story was written by Rick Telander, the same writer who profiled Mandarich for the 1989 cover. In the ’09 story, Mandarich not only admits that he used steroids, he apologizes repeatedly to Telander for misleading him 20 years ago.

The steroid world keeps expanding, with testers lagging behind the cheats. I show him the SI article I wrote in 1988 with South Carolina football player Tommy Chaikin, in which Chaikin detailed his own steroid abuse. “I can relate to the mind racing,” he says. “I can relate to the anxiety attacks. I can’t relate to the near-suicidal part. I was much more homicidal than suicidal.” He stops. “Really, Rick, I am sorry.”

Previous World Cup 2022: Denmark to wear ‘toned down’ jerseys in protest at hosts Qatar
Next Dish’s 5G service still feels like a beta