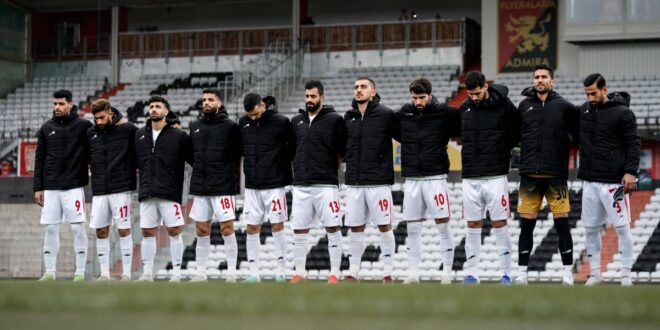 Players on the Iran national soccer team covered their country’s emblem during the national anthem prior to Tuesday’s World Cup tune-up match against Senegal.

Before kick-off, the entire Iranian squad stood on the pitch wearing plain black jackets over their official uniforms. The group stood with their arms around one another and kept the extra layer on until they took the field for the start of the game.

The action from Iran’s players comes amid widespread demonstrations in the country following the death of Mahsa Amini. The 22-year-old woman died in police custody in Iran earlier this month after being charged with wearing a headscarf improperly, according to ESPN’s Mark Ogden.

Amini’s death has sparked protests in Iran as women have been seen removing and burning their state-mandated headscarves, according to The Associated Press. Iran’s president, Ebrahim Raisi, said that the circumstances of Amini’s death would be “steadfastly” investigated after Iranian police said she died of a heart attack.

Demonstrations have carried over to the sporting world as two men were seen holding a sign that said Amini was “murdered by the police of the Islamic Republic of Iran,” during last week’s international friendly between Iran and Uruguay. The protesters refused to hand over the sign and were marched out of the NV Arena by police in Austria as a result.

Iran’s final match before November’s World Cup ended in a 1–1 draw with Senegal.