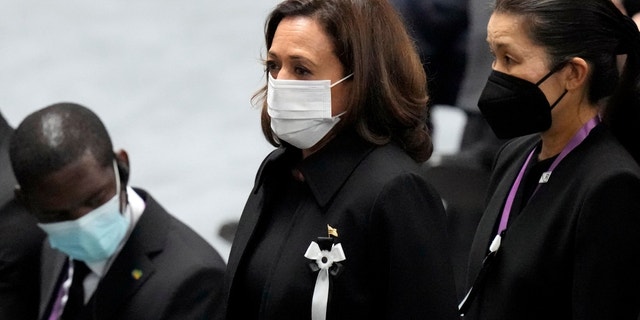 Vice President Kamala Harris attended the state funeral of assassinated former Prime Minister Shinzo Abe on Tuesday, as Tokyo was put under maximum security due to the high-profile procession.

Harris represented the United States at the ceremony, which was attended by roughly 4,300 people. Other foreign dignitaries at Abe’s funeral include Indian Prime Minister Narendra Modi and Australian Prime Minister Anthony Albanese.

Harris sat next to Rahm Emanuel, the U.S. ambassador to Japan, who formerly served as the Mayor of Chicago.

In a press gaggle after the funeral, Harris said her visit to Japan came “under very sad circumstances.” “There has been much that has been said in honor of his role of leadership,” she told reporters.

Harris praised Abe for “opening up” the Indo-Pacific region, adding that she had recently attended a dinner with current Prime Minister Fumio Kishida to celebrate Abe’s legacy.

“As a member of the Indo-Pacific region, as America, we cherish those principles and we stand by them,” she said.

Abe, one of Japan’s most polarizing leaders, was shot and killed while campaigning in the Nara, western Japan in July – the first assassination of a former Japanese Prime Minister since 1936.

His sudden death invoked mixed reactions across the country. Hundreds of people laid bouquets of flowers at Kudanzaka Park in honor of Abe on Tuesday, while former President Trump praised him as “a man who loved and cherished his magnificent country” in the wake of his death.

TRUMP MOURNS SHINZO ABE, ‘A UNIFIER LIKE NO OTHER’ WHO ‘CHERISHED HIS MAGNIFICENT COUNTRY’ 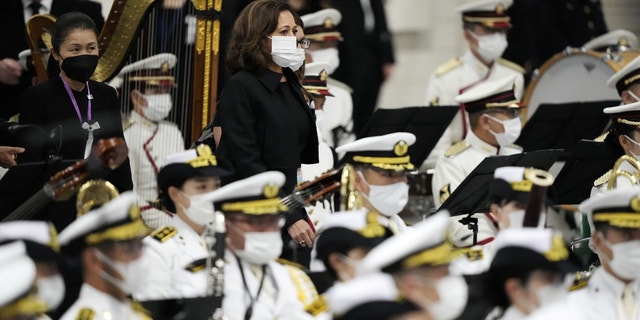 Despite Abe’s popularity as the longest-serving prime minister in Japanese history, protests were also planned on the day of his funeral.

The holding of the funeral itself is a controversial topic in Japan. Prime Minister Fumio Kishida maintained that Abe deserved a grand funeral and said no one is forced to honor Abe.

But Kishida has been criticized for holding the expensive event, which is projected to cost $11.5 million. Many protesting Japanese citizens also criticized the ruling party’s close relationship with the Unification Church, saying the church elicits donations by “brainwashing” citizens.

Tetsuya Yamagami, the man accused of murdering Abe, allegedly told police that he was motivated to kill Abe because of his affiliation with the Unification Church. He was upset that his mother donated a large amount of his family’s money to the church.

Abe’s ashes were carried into the Nippon Budokan arena by his wife, Akie Abe. A cannon boom went off several times for the procession and could be heard inside the arena where people were seated.

Prime Minister Fumio eulogized Abe in Japanese. Other Japanese politicians followed with their own speeches and faced Abe’s ashes as they spoke. Abe’s widow was seen on the projector screen wiping away tears throughout the funeral. 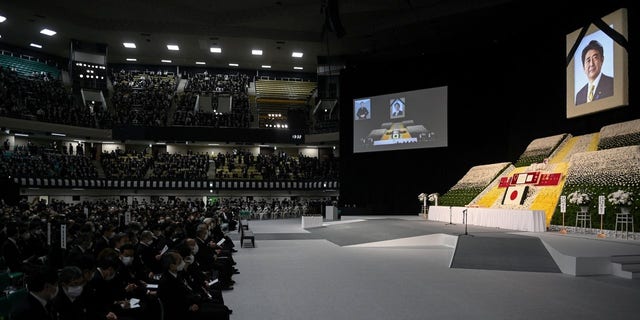 Guests wait for the start of the state funeral of former Japanese Prime Minister Shinzo Abe at the Nippon Budokan in Tokyo on September 27, 2022.
(PHILIP FONG/POOL/AFP via Getty Images)

Towards the end of the funeral, foreign dignitaries walked up to place flowers at the front of the stage, including Vice President Harris and other members of the U.S. delegation.

VP Harris is scheduled to visit the Demilitarized Zone (DMZ) separating the Koreas on Thursday.

Her visit comes just days after North Korea fired a ballistic missile towards the sea and amid fears of a possible nuclear test as the Biden administration’s attempts at outreach to North Korean leader Kim Jong Un have failed.

Harris’ visit will be the first by a senior Biden administration official.