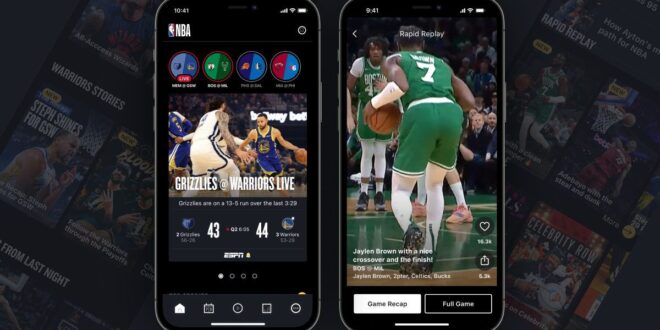 TikTok’s vertically-oriented, curated approach to social video has transformed feeds for better and worse, and the NBA is next in line with its newly redesigned app for Android and iOS.

A major part of its individualized user experience is a “For You” vertical video feed that will show highlights from NBA games featuring “behind-the-scenes access to players and teams,” NBA-related shows, content from influencers, and showcase partnered channels like Turner Sports and Bleacher Report.

Another modern social media feature the new NBA app includes is its “stories.” Similar to Snapchat, Instagram, and others, it has a horizontal selection of expiring videos that show top plays or dunks and other NBA-related news. Of course, the app will show live feeds from games and media days.

Competitors like Instagram taking content strategies from TikTok has been a common theme. With this launch, we’re seeing its influence on other institutions beyond social media, as they try their hand at curating content in-house as opposed to feeding it externally to support social media platforms.

Users who already pay for a subscription to NBA League Pass for streaming out-of-market games can link that account to their NBA ID account. According to a press release, in the new app, “the live streams will feature higher video quality, lower streaming latency and a seamless user experience.”

NBA ID members will have access to the NBA Vault. The NBA Vault contains over 3,000 hours of archival footage, including about 500 “classic games in NBA history” for free and every NBA Finals game since 2000. NBA documentaries will be on the app, too. The redesign will also bring in new programming. A new series called Pass the Rock will showcase “the league’s next generation of stars and their lives on and off the court throughout the 2022-23 season.” It is set to begin in late November.

Correction September 27th 10:44AM ET: The NBA’s original press release included details about a SiriusXM integration, we were informed after publication that it is not final and have removed a reference to it.