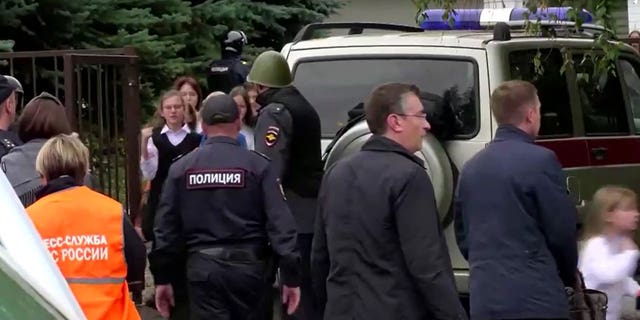 A gunman with a swastika on his teeshirt killed 15 people, including 11 children, and wounded 24 at a school in Russia on Monday before taking his own life, investigators said.

The attacker, a man in his early thirties who was named by authorities as Artem Kazantsev, killed two security guards and then opened fire on students and teachers at School Number 88 in Izhevsk, where he had once been a pupil.

WOMAN SAYS ‘I HATE MEXICANS’ AFTER PUNCHING SUBWAY RIDER IN THE FACE: NYPD

Public service members attend to a crime scene where a gunman opened fire at a Russian school on Sept. 26, 2022.
(REUTERS/kp.ru)

The Investigative Committee said that of the 24 people wounded, all but two were children. Regional governor Alexander Brechalov said surgeons had carried out a number of operations.

He said the attacker had been registered with a “psycho-neurological” treatment facility. Investigators said the man was armed with two pistols and a large supply of ammunition.

Previous House Republicans urge Biden admin to ‘take every possible step’ to stop illegal migration from Venezuela
Next Tampa mayor gets Biden phone call live during press conference: ‘I got a call from the president’