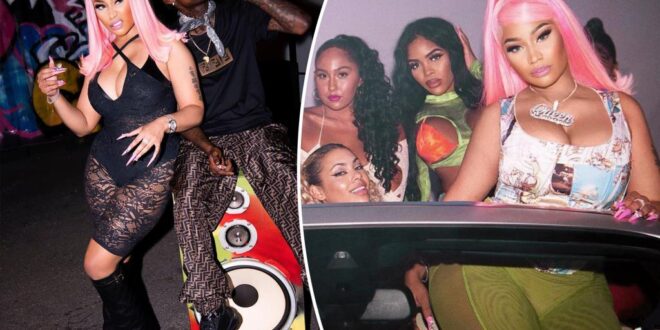 “Imagine this. They restricted my f – – king video but have things a million f – – king times worse on their BOGUS FKNG PLATFORM,” the rapper wrote in a since-deleted Instagram post under a screenshot of the YouTube community guidelines violation notice. “This is what they do to keep you from winning while doing ads for other ppl and posting FAKE FKNG STATS. Because the same ppl who run YouTube are in bed with a certain record label and mngmnt company.”

The violation notice informed Minaj, 39, that her content “may not be suitable for viewers under the age of 18,” and that the video wouldn’t be visible to people who aren’t logged into the platform, are under 18 years old or have Restricted Mode turned on.

The “Super Bass” singer posted a follow-up Instagram post, which she has since deleted, writing: “This was done to stop us from getting a lot of views in the first 24 hours. The DUDS at my label allow ppl to use my videos all the time to promote weak s – – t but said we can’t buy promo for my videos.”

Minaj is currently listed on Republic Records’ website as one of their artists, but she recently spoke about starting her own label, according to HipHopDX.

“It’s time y’all tell ppl that you’re in bed with a whole record label & mngmnt company!!!!! How long have yall been playing the numbers game to lie & pretend ppl r doing ‘good’ when they r not?!?!!,” Minaj wrote in the second post with the same screenshot, this time tagging YouTube’s official Instagram account. “How much ad space did these duds purchase to be promoted on my channel in the last 5 years?!??!!!!”

Despite the age restriction, the music video gained roughly 800,000 views on the first day, to which Minaj responded: “They can’t give us back our first 24 hours can they?!?!!! So mission accomplished.”