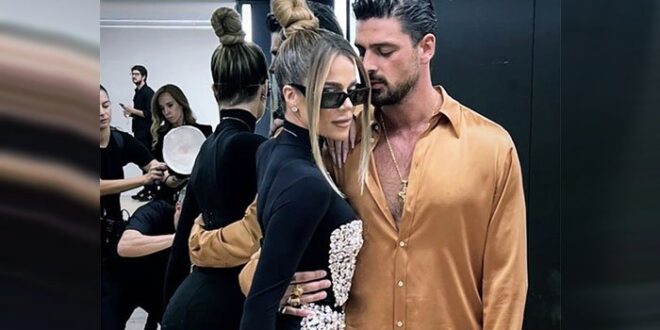 After Khloé Kardashian and Tristan Thompson split in 2018, it was reported in March this year that the reality star was ready to date again, per Elle.

Speculation began of a possible romance brewing between the two after the pair was spotted together during and after Dolce & Gabbana’s SS23 Milan Fashion Week show. The mother-of-two had attended to show support older sister Kim, who debuted her new collection with the Dolce & Gabbana design.

At the show, Khloe was seen sitting next to the Italian actor. The duo was also sat near three of Kim’s children (North, Saint and Chicago) as well as momager Kris Jenner.

Later, Morrone, 31, posted a photo to his Instagram Story showing him and Kardashian looking cosy backstage. In the image, his arms are wrapped around Khloe’s waist, and he appears to be whispering in her ear as she gazes ahead. The photo unsurprisingly went viral, along with a video of the pair dancing closely at an after-party.

However, fans were quick to respond gushed about the possible romance between the two

One fan on Twitter wrote: “Khloe Kardashian and Michele Morrone (Massimo) is a duo I never knew I needed”

Another tweeted, “HELPP WHAT KHLOE IS DATING MICHELE?? I’m sorry but this is what Khloe needed, out with the OLD NBA Player and in with the new Italian actor! We are tired of NBA boyfriends they are walking red flags, hopefully Michele treats her right.” (sic)

However, the rep also added that Michele thought Khloe was very nice, but that’s the extent of their relationship.