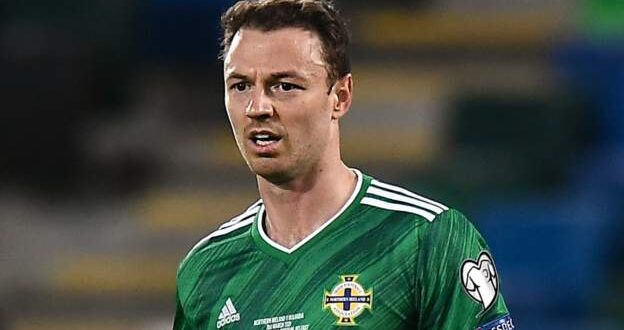 Jonny Evans: How ‘making up the numbers’ in training set NI defender on course for 100 caps

Jonny Evans’ Northern Ireland debut was one of the most memorable in the country’s history. Yet, just a few days earlier, the manager had never heard of him.

Lawrie Sanchez’s side had lost 3-0 at home to Iceland on the Saturday when, on the Monday morning of 4 September 2006, he needed a few players from the Under-21 squad “to make up the numbers” for a practice game.

Spain, world and double European champions-elect, were coming to town on the Wednesday and a special night at Windsor Park was brewing.

Evans, an 18-year-old Manchester United centre-half yet to make a first-team appearance, was one of those asked to step up – and play in an unfamiliar position.

“I hadn’t even met Jonny at the time until the Monday and that was the first time I had seen him play,” explained Sanchez, who was manager of Northern Ireland from 2004 to 2007.

“Jonny was a centre-half but we didn’t have a left-back and he could play off both feet. During the 11 v 11 game I stood with my coaches thinking ‘he’s not bad, you know’.

“I think it was Jon Goodman (Sanchez’s conditioning coach) who suggested we keep him with us, so I did. We were even more impressed with him in training on the Tuesday and so we made the decision to play him against Spain. I felt ‘he’s comfortable on the ball, he’s a big lad and has a lot about him, so let’s put him in’. The players liked him and it just seemed normal.”

‘Torres, Raul and Villa all tried their luck’

A remarkable milestone in an international career that could barely have begun in much more daunting circumstances.

Just 18. Up against the world and double European champions-elect. Playing out of position. Having never played for his club. The team under pressure. And a manager he had only just met.

How did he cope? Well, Sanchez’s abiding memory from the game perhaps provides the ideal snapshot.

“The thing I remember most is Spain’s front three of Fernando Torres, Raul and David Villa each going up against Jonny,” he recalled.

“Torres started on the right and, after a while, he swapped with David Villa, who came over and had a go. A while after that Villa swapped with Raul. It was like ‘well you have a go at him’.

“All three of them knew there was this young kid playing his first game and were probably thinking they would be able to get something out of him. But they didn’t. Jonny looked as though he had played 100 games for us at left-back.”

A strong no from Sir Alex and Greek stadium symmetry

Evans soon became a regular under Sanchez before the former Wimbledon midfielder was unable to resist the call of the Premier League, leaving to take over at Fulham in 2007.

He gathered a collection of Northern Ireland players at Craven Cottage but was unsuccessful in his attempts to sign the Greenisland Academy graduate.

“I was speaking to Sir Alex Ferguson and enquired about buying Jonny as he wasn’t in the United first team, but was quickly told they had already turned down £15m for him.

“I asked about a loan and again he said no, and soon after he was in the team at United. Sir Alex was adamant he was one for the future so he wasn’t having it.”

The pride with which Sanchez has watched Evans’ career progress will soar even further if Evans does win his 100th cap against the Greeks.

“I realised recently that the match is being played at the Georgios Kamaras Stadium, which is where I managed Apollon Smyrnis [for five months from November 2013]. It’s quite ironic that Jonny will reach this milestone there.”

Room-mate Healy was already in the know

While Sanchez may not have known much about the talented United youngster, his top marksman David Healy, who himself came through the youth ranks at Old Trafford, most certainly did.

Indeed, it was probably the United connection that led the manager to make the striker Evans’ first-ever international room-mate – a move that helped establish a strong friendship that lasts to this day.

“I remember when I was about 18 speaking to Eddie Coulter, the scout who took Jonny and I to United, and he was raving about this young player that he had,” Healy said.

“I took Eddie’s word when he said he had never seen a player like Jonny -‘you want to see this boy’ was what he said. Then, when you actually get to see him train, play and be in and around the group you could tell within 24 hours that we had a real player on our hands.

“Jonny, the person and player, is just incredible. I’ve got to know him over the years and he has been a fantastic servant to Northern Ireland. He is so respectful, he is humble and he comes from a good family.”

While jokingly describing his good friend’s golf as “rubbish”, there was a glint in Healy’s eye when he spoke about Evans’ qualities as a player.

“His commitment first and foremost, his fitness levels – I know he has missed a few games with niggly injuries but he more often than not makes himself available.

“Jonny comes from that background where playing for Northern Ireland means a lot and if every player approached it in that manner there would be a lot more players probably winning 100 caps.

“It is his calmness, his understanding and the defensive cover he provides. He is very comfortable on both sides. It could have been a blow when he had to leave Man United, but he has thrived at West Brom and Leicester. He still gets disappointed and angry when other people around him are not doing their jobs, that is the way he is.”

While Evans has consistently delivered excellent performances for his country across his 99 caps, there are two displays that stand out for Healy – and one that wasn’t in the script of a certain Cristiano Ronaldo.

“We drew 1-1 away on Ronaldo’s 100th cap on a damp night in Portugal. Everyone at the the time was talking about Pepe and Bruno Alves, but Jonny was incredible that night. I said to him afterwards ‘people were talking about Alves moving for £25m, and if that’s the case then you are worth £80m’.

“The other performance was against Italy recently when we drew 0-0 and the Italian coaching staff [including Roberto Mancini and Gianluca Vialli] remarked on how Jonny could have been Italian. He is first class.”

Back in 2006, Evans could well have been Italian for all Lawrie Sanchez knew. But he, and every Northern Ireland supporter, soon found out all about him.