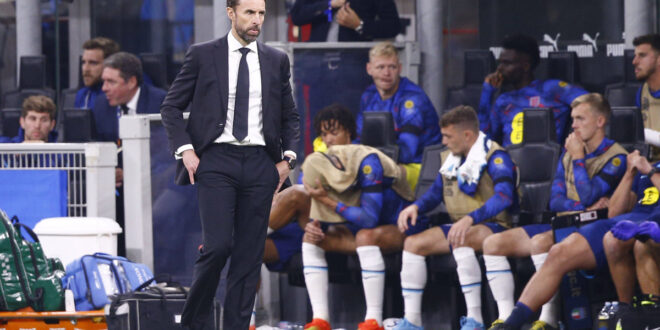 The grumbles were there even as England reached the final of the European Championship—which proved at least that the mood around an England manager has very little to do with the actual football. But moods have a tendency to become self-fulfilling and recent form has been dismal.

England hasn’t won any of its last five games and is suddenly in a major slump of form, with major questions in a number of positions and manager Gareth Southgate coming under mounting pressure.

The England manager’s job is to be criticized, almost whatever happens. In the past six years, Southgate has won five knockout games at major tournaments; in the previous 66, England had won only nine. In the past six years, Southgate has taken England to two semifinals; in the previous 66, England had reached only three. By comparison with what went before, his record is very good; he stands behind only Alf Ramsey in terms of achievement. And yet there is something about the circus that surrounds England that means nothing is ever enough.

Before the 2018 World Cup, expectations were at an all-time low after dismal performances at the previous World Cup and at Euro 2016, but it didn’t take long for a familiar arrogance to reassert itself. There is a narrative now that Southgate has been lucky with his draws and that England have not beaten anybody good in knockouts: as though Colombia, Sweden, Germany, Ukraine and Denmark were no-hopers.

There’s a perception that his football is over-defensive and that he is somehow betraying a great generation of attacking talent. But that is absurd. Harry Kane, Raheem Sterling, Phil Foden, Mason Mount, Jack Grealish, Bukayo Saka, Marcus Rashford and Jadon Sancho do represent great depth of talent, but it’s absurd to suggest that whichever three or four of them are selected are any better than the forward line of perhaps eight or 10 other countries. These are decent rather than outstanding players; the growing idea that Southgate has somehow underachieved with this generation is preposterous.

Besides which, international football is slower and clunkier than club football; tournaments tend not to be won by the devastating or the thrilling, but by well-organized teams who can hold opponents off and then have enough attacking flair to force a goal or take advantage of an error. Southgate himself has spoken of taking Portugal in 2016 and France in 2018 as his models.

Where there has perhaps been room for genuine criticism has been in Southgate’s lack of decisiveness when games have gone against him. England retains its age-old tendency to take the lead in a big match and then drop deep, as the terror of potential achievement assails them. Southgate has not been able to counter that and, against both Croatia in the 2018 World Cup semifinal and against Italy in the final of the Euros, it was evident that the balance of the game had shifted long before decisive goals came. Southgate is a long-term strategist; he is not somebody adept at changing the shape of a game that has begun to turn against his team.

But then came June. The Nations League felt like a needless addendum to the season. The COVID-related changes to the schedule had left everybody exhausted. Nobody wanted to be playing those games. England drew against Italy and Germany but lost twice to Hungary (Germany and France, it might be noted, have also been in rotten form recently and Spain and Italy have not been great; fatigue has sapped all of the major European powers). The pent-up frustration that had been repressed by England’s progress to the finals of the Euros erupted into booing after the defeat to Hungary, and it was there again in Milan on Friday as England’s relegation to Group B of the Nations League was confirmed.

Southgate has spoken of how he regretted compromising his beliefs in the summer, which presumably means a return to more a safety-first approach, but the problem is he is now doing so with numerous players—Harry Maguire and Kyle Walker most notably—out of form and with others such as Jordan Pickford, Kalvin Phillips and Jordan Henderson unavailable through injury. And there is no time, just Monday’s Nations League game against Germany, to put it right.

England will not be the only side that finds the lack of preparation time problematic— a week between the end of domestic seasons and the start of the World Cup is a nonsense—but Southgate’s side is starting from a lower point than many others who would regard themselves as challengers. England may have been a penalty from winning the Euros, but this World Cup already has the feel of an endgame for Southgate.