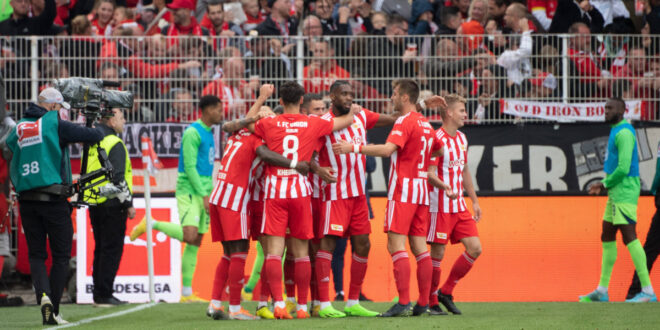 Less than a week after he was omitted from the upcoming U.S. men’s national team camp, Jordan Pefok scored once again in the Bundesliga for first-place Union Berlin.

Plenty of USMNT fans were left puzzled by Pefok’s omission earlier this week given his hot start to the Bundesliga season, and the 26-year-old’s performance on Sunday only adds to the questions.

In the 54th minute of a 2-0 win against Wolfsburg, the D.C.-born forward made a darting, near-post run that ended in a diving header to break the scoreless draw. It was Pefok’s fourth goal in eight games across all competitions (to go with three assists) since arriving at Union Berlin this summer from Swiss side Young Boys.

USMNT manager Gregg Berhalter opted to bring other forwards, including Jordan Morris and Ricardo Pepi, into camp as the they battle for a spot on the World Cup roster. Earlier this week, Berhalter explained Pefok’s omission, saying that he wanted to get a better look at other forwards ahead of the World Cup.

“We’re pretty confident we know Jordan’s profile,” Berhalter said in a Wednesday conference call, per The Sporting News. “We know what he can do. And we didn’t feel like we needed to see him in this camp to determine whether he could be on the roster or not.

“… I think we’ve been consistent in saying it may not be the best forward that is in the group. It’s the guy that fits what we’re doing the best. We’re pretty confident we know what Jordan can do. It’s been fun watching him play. He’s off to a great start in the Bundesliga, and we opted for someone else in this camp.”

The USMNT will play Japan on Friday before facing Saudi Arabia on Sept. 27 in the last international break before the World Cup.