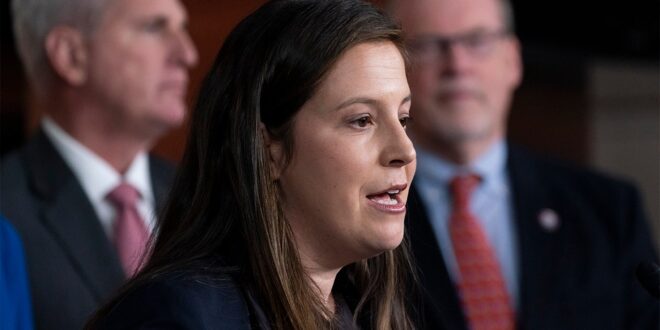 House Republican Conference chair Rep. Elise Stefanik, R-N.Y., denied that more right-wing members of her party are at odds with the rest of the GOP and took a shot at Democratic leaders over their criticism of Republican politics.

In an interview with “Fox News Sunday,” host Shannon Bream mentioned a recent report, as well as her own conversations with members of the GOP’s Freedom Caucus, that indicate that the more conservative members feel they are “being taken for granted.” Stefanik denied that there is any problem within her party.

Regarding that agenda, Democrats have accused Republicans of not putting forth many details of an actual plan in their recently-released “Commitment to America” 2023 agenda. Stefanik rejected this idea as well.

KEVIN MCCARTHY ON ‘COMMITMENT TO AMERICA’ PLAN: GOP WILL HOLD GOVERNMENT ACCOUNTABLE ‘LIKE YOU HAVEN’T SEEN’

“There are ample details,” Stefanik said. She pointed to plans to reduce inflation by cutting government spending, lower energy through multiple bills that Democrats currently will not consider, bills aimed at supporting law enforcement, a Parents Bill of Rights, and a plan to eliminate the 87,000  new IRS agents Democrats approved.

“Democrats have no plan,” Stefanik insisted. “They are attacking us because they have created crises across this country.”

The Republican said Democrats do not have any plan to solve problems regarding inflation, crime, or the border, while “we have legislation on each and every one of these issues.”

Bream pointed to criticism from House Majority Leader Rep. Steny Hoyer, D-Md., who said the last time Republicans controlled Congress, it was a “do-nothing” Congress. For example, while the GOP had promised to repeal Obamacare, they did not.

“Steny Hoyer is dead wrong,” Stefanik said, claiming that under Republican leadership, the border was more secure and the country enjoyed economic success.

“Well, first of all, Hakeem Jeffries should start acting like a leader rather than a partisan hack,” Stefanik fired back. She went on to blame border insecurity and the flood of migrants on Democratic policies.

“All of these border issues, all of this immigration crisis, is the result of Joe Biden’s failure,” she said.