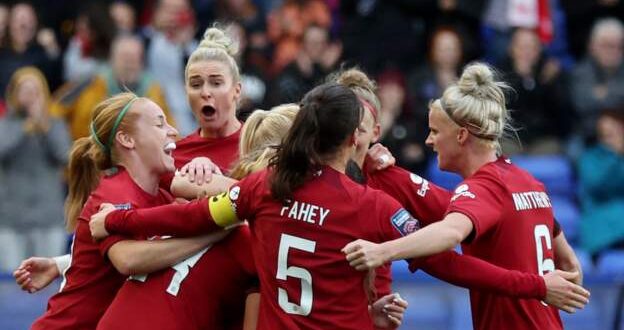 Liverpool aim to show club back where it belongs in WSL

It has been far from plain sailing for Liverpool since they last competed at the top end of the Women’s Super League – but now they are back and hoping to make their mark.

In 2013, the Merseyside club had become the first team in the WSL to become full-time professionals. They won the league title that year, and successfully retained it in 2014.

Yet they failed to build on that initial investment and stood still while clubs around them matched, and then surpassed, them. They dropped to seventh the following season and never came close to those lofty heights again.

Their gradual decline culminated in their relegation in 2020, along with accusations of poor training facilities and poor treatment of players.

The former heavyweights spent two seasons in England’s second tier but, boosted by the return of their WSL title-winning manager Matt Beard, they earned promotion in April and are now a club on the way back up as they rebuild on and off the pitch.

They returned with a bang last weekend as they defeated champions Chelsea 2-1 in their season opener – backing up their pre-season talk of aiming for more than just survival.

“We wouldn’t be here if we couldn’t compete in the WSL,” striker Katie Stengel – who scored both goals against Chelsea – told BBC Sport.

“We proved that last year and had success. At the end of the day it’s still 11 players on each side, a ball and you have to score more than your opponent.”

Liverpool will look to build on their impressive return to the WSL when they host Everton in Sunday’s Merseyside derby at Anfield.

Defender Gilly Flaherty, who left West Ham as captain in the summer to join Liverpool and reunite with former boss Beard, has watched the club’s progress from afar.

“I’ve always kept an eye on Liverpool. The year before they probably should have gone up with the players they had,” Flaherty told BBC Sport.

“I am someone who has come in with experience of the WSL and we need to make sure we’re not naive. It’s a different ball game to the Championship.

“At the same time we are good enough to not just stay up here and survive, we want to come up and hold our own and for people to say ‘have you seen Liverpool?’

“Off the field the club are pushing. It’s not just a one-hit wonder of going up and the support stops. It’s for the future and the foreseeable. We’re here to make sure Liverpool are not a yo-yo club.”

‘Back where we belong’

Liverpool are in advanced plans to build a new training facility for the women’s team and this summer showed their ambition in the transfer market.

They also kept hold of key players, with new deals for goalkeeper Rachael Laws, captain Niamh Fahey, Liverpool-born Missy Bo Kearns and last season’s top scorer Leanne Kiernan – although the latter is set to be sidelined for a few months with a recent ankle injury.

“The great thing is the core group of players have been with each other for the last couple of seasons. Sometimes less in the transfer window is more,” said Flaherty.

“It’s improving and strengthening an already good team. I have no doubts about how good this season will be for us.”

Kearns, 21, was breaking into the first team when Liverpool last competed in the WSL so she knows how challenging the league can be.

“We want to win every game but it’s just a game of football so we can’t put too much pressure on ourselves,” she said.

“Now we’re back in the WSL, it’s where we belong, so it’s just about marking that.”

Manager Beard, who led Liverpool to both WSL titles in his last spell in charge before joining Boston Breakers in the United States, is also cautious of managing expectations.

Heavy investment from clubs, increased revenue from broadcast deals and sponsorship, as well as rising attendances off the back of Euro 2022, means the WSL is a much more competitive league than it was when Liverpool last competed in it.

“We are ambitious but we are also realistic,” Beard says. “I do feel we are better equipped personnel-wise than what Aston Villa and Leicester perhaps were when they made the step up.

“It’s about consolidation, making sure we’re competitive and seeing where it takes us.”

American Stengel was brought in last January with the club already looking to build a squad fit for the WSL – and she did not take long to make her mark in the top flight with her double against Chelsea last weekend.

“I’ve always wanted to play in the WSL so when the opportunity came I thought ‘let’s do this.’ We had to get promoted last year but now we’re finally here.

“It’s crazy because you watched the Euros and saw all of those players everywhere. I would walk into shops and see faces on Doritos bags or on billboards around the city. Let’s build on that.

“We have a brand that everyone gets to see and loves in the men’s game so let’s make sure they know the women’s teams are around as well.”