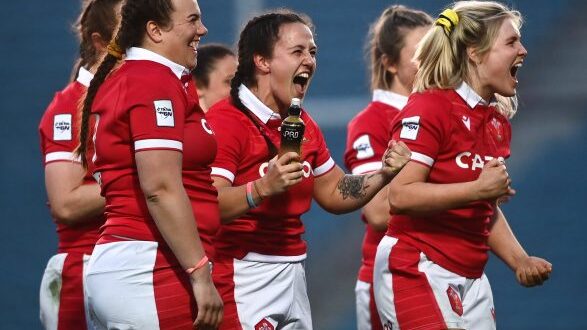 Can Wales conclude a groundbreaking year off the field with success in New Zealand?

Regardless of what happens at the Rugby World Cup, 2022 has been a landmark year for Wales.

It began with the first 12 full-time women’s contracts being handed out by the WRU in January, alongside a batch of semi-professional deals.

The contracts had an instant impact in the 2022 Six Nations, as Wales won their first two matches with late surges that suggested professionalism had already improved the team’s fitness levels.

However, comprehensive defeats by England and France quickly reminded Ioan Cunningham’s side that challenging the top countries will not happen instantly, while the final-round home loss to Italy was the first major disappointment of the campaign. Still, their third-place finish was their highest since 2009.

The positive developments have continued into the summer, as the number of full-time contracts was increased to 29 last July. Kelsey Jones, Kayleigh Powell and Gwen Crabb – all of whom shined in the Six Nations – were among those to receive professional deals. Other players have received three-month contracts that cover the World Cup.

With plenty going right off the field, Wales should expect a positive showing in the global showpiece event. Their pool includes Scotland, who they have already beaten this year, and Australia, who have won just one match this year. Reaching the quarter-finals is a realistic aim, despite their other group opponent being host nation New Zealand.

Wales reached the semi-finals at the second women’s World Cup in 1994, but that remains their best finish. Making the last four in 2022 may be beyond them but, with the reintroduction of quarter-finals to the tournament, they have a superb opportunity to reach the knockout stages.

Sioned Harries, Elinor Snowsill and Caryl Thomas are heading to their fourth World Cup while, in contrast, 19 players are poised to play in the tournament for the first time.

Lowri Norkett, whose sister Elli played at RWC 2014 but tragically died in a car crash aged 20 in 2017, is amongst those selected and in line to make her World Cup debut.

Cunningham said, “We are delighted with the group we’ve settled on, we are really looking forward to seeing what we can do when we touch down in New Zealand next week.

“Siwan is a brilliant captain on and off field. She has a great tactical mind and an understanding of what calls to make at what moment. Her communication with referees and her game management skills are second to none. She certainly benefits the team in many ways.”