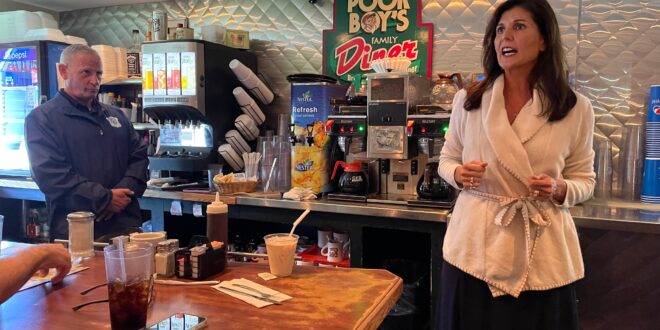 LONDONDERRY, N.H. – Standing behind the counter of Poor Boy’s Family Diner in this southern New Hampshire town, Nikki Haley had a message for supporters of GOP Senate nominee Don Bolduc.

“All eyes are on New Hampshire, right. Because the majority goes through New Hampshire,” the former Republican governor of South Carolina — who later served as ambassador to the United Nations in former President Donald Trump’s administration — told the crowd.

Bolduc is now challenging former governor and first-term Democratic Sen. Maggie Hassan — whom the GOP views as vulnerable — in a race that’s one of a handful across the country that may determine if Republicans win back the Senate majority in November’s midterms.

Former South Carolina Gov. Nikki Haley, who served as ambassador to the United Nations during the Trump administration, teams up on the campaign trail with GOP Senate nominee Don Bolduc of New Hampshire, at Poor Boy’s Family Diner, on Sept. 23, 2022 in Londonderry, N.H,.
(Fox News )

“We need to come together. Everybody come together and beat Maggie Hassan,” Bolduc urged the crowd, which was a mix of the candidate’s supporters and late afternoon customers at the diner.

The most recent public opinion poll in the race — from the University of New Hampshire Survey Center — indicates Hassan ahead by eight points among likely voters. One indicator of her lead is that Hassan enjoyed the backing of 98% of Democrats while Bolduc — following a combative primary — was supported by only 83% of Republicans.

“Bolduc will need to heal the intra party divide and increase his support among Republicans if he is to have a chance at defeating Hassan,” UNH Survey Center director Andrew Smith said.

Asked about party unity, Bolduc told Fox News that “I’m just a brand-new nominee… one week and a couple of days old. It takes some time, but we’re going to get there.”

And he said the campaign stop in Londonderry with well-known national Republican leader like Haley, and a second later on Friday in Hollis, New Hampshire, were helpful in his mission to unify Republican voters.

“I am honored, humbled, and grateful to have her support,” Bolduc said.

Haley, through her Stand for America PAC, has been crisscrossing the country this cycle on behalf of fellow Republicans running in the 2022 elections. According to her political team, Haley’s held more than 50 events and raised more than $5 million.

And many of Haley’s visits are coming on the heels of often divisive GOP nomination battles across the country this year.

THESE 11 SENATE RACES WILL DECIDE CONTROL OF THE SENATE

And pointing to pocketbook issues such as this year’s record inflation, which favor Republicans, Haley said: “that’s what they’re [voters] talking about… They want people who are going to work for them, not the other way around. And they’re not feeling that right now, whether it’s in New Hampshire with Maggie Hassan or whether it’s with Joe Biden in Washington D.C.”

Haley’s latest swing through the Granite State kicked began Thursday night, when she headlined a fundraiser in Rollinsford, New Hampshire, for Sununu — who’s running for a fourth two-year term as governor. And following her events on Friday with Bolduc, she headlined a fundraising dinner for the Cheshire County GOP. Word of Haley’s visit to New Hampshire was first reported by Fox News on Tuesday.

Besides being a crucial swing state, New Hampshire for a century has held the first primary in the race for the White House. Haley’s travels this year have also taken her back to Iowa, whose caucuses for five decades have kicked off the presidential nominating calendar. And next week, Haley returns to Nevada, which votes fourth in the GOP presidential primary schedule, to team up on the campaign trail with GOP Senate nominee Adam Laxalt. Haley’s home state of South Carolina holds the third contest in the Republican nominating calendar.

Haley, who says she’s considering a potential run for the 2024 GOP presidential nomination, told Fox News that “if we don’t win in November, there is no 2024.”

And she also reiterated that “after November, we’ll figure it out. But you know what I’ve said — I’ve never lost a race. I’m not going to start now. If there’s place for me, we’ll put a 100% in, and we’ll finish it.”