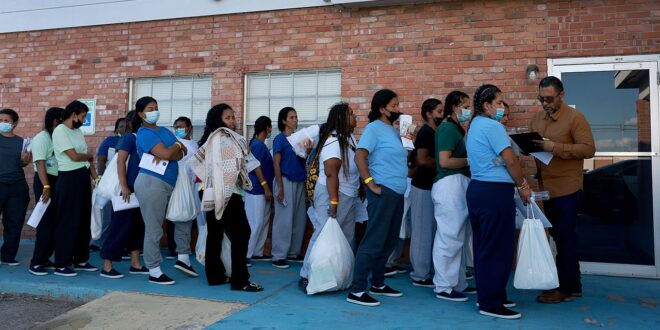 Border Patrol agents along just one sector of the southern border are encountering approximately 1,500 illegal migrants each day amid ongoing controversies over the transport of a fraction of those numbers to liberal areas in the U.S.

Customs and Border Protection said in a statement that “in recent days” agents have seen approximately 1,500 encounters daily, many of them from Venezuela, Nicaragua and Cuba.

That is part of a trend seen along the border as a whole. There were more than 203,000 migrant encounters in August, over 157,000 of which were unique encounters. According to data released this week, there has been a 175% increase in unique encounters of migrants from Venezuela, Cuba and Nicaragua over the last year.

Agents have made a number of rescues in the sector, including 13 migrants locked in a truck without oxygen. Within a seven day period, agents in El Paso have arrested two individuals with “extensive” criminal records and gang affiliations, disrupted a stash house and made multiple rescues.

Migrants who recently arrived from Venezuela after crossing from Mexico wait to be assigned a hotel room provided by the El Paso Office of Emergency Management on Sept. 21, 2022, in El Paso, Texas.
(Photo by Joe Raedle/Getty Images)

Chief Patrol Agent Gloria Chavez showed the events show “how complex our border environment has become and the determination by our Border Patrol Agents to adjust operationally as needed to address any situation on the border.”

Fox News reported last week how several hundred migrants were gathering under a bridge in El Paso, with local facilities overwhelmed – and CBP forced to release migrants near shelters and bus stations.

The 1,500 encounters a day eclipse the numbers being sent by Republican governors to liberal jurisdictions across the country. Texas has been bussing migrants to New York City, Chicago and Washington D.C. – all self-described “sanctuary cities.”

So far, Gov. Greg Abbott has sent 8,100 migrants to D.C. since April, 2,700 migrants to New York City since the beginning of August, and fewer than 800 migrants to Chicago since the end of August. Meanwhile, Florida Gov. Ron DeSantis sparked outrage from Democrats this month when he flew 50 migrants to Martha’s Vineyard, with the White House accusing him of treating migrants like “chattel.” Democrats have accused Republicans of misleading migrants and using them as political props – claims the governors have denied.

The liberal cities have said their systems have been overwhelmed by the numbers and have called for federal aid while slamming what they say is a cruel move by the Republican governors. The governors in turn have noted the disparity in numbers and said that they are pushing for more attention on what border cities and states are enduring.

“Texas’ inundated border towns are now receiving a measure of relief, and importantly, the magnitude of this ongoing crisis is finally gaining the national attention it deserves,” Abbott said in a recent op-ed. “Americans are now witnessing a startling national security failure that the President continues to dismiss.”

BORDER SHERIFFS SLAM DC MAYOR, OFFICIALS FOR DECLARING EMERGENCY OVER MIGRANT BUSES: ‘THEY HAVE SEEN NOTHING’

The city’s Democratic mayor has said that many of the migrants are from Venezuela and do not have sponsors in the U.S. who can help them.

“We have about 50% of the people today that do not have a sponsor, they do not have money, so we’re helping and working to get them to where they want to go,” Mayor Oscar Leeser said on ABC’s “This Week.”

Asked why Leeser is not seeing the same criticism that the Republican governors are facing, New York City Mayor Eric Adams said that it was in part due to communication.

“When we reached out to the mayor of El Paso, he was willing to sit down and share what his concerns are and what our concerns are and figure out a humane way to coordinate,” he said at a press conference this week. “And we are clear, we cannot handle all of your migrants, mayor of El Paso. But we were able to communicate with them. We were not able to do that with Governor Abbott’s team. We spoke with them, they stated they were going to inform us, and he did not.”