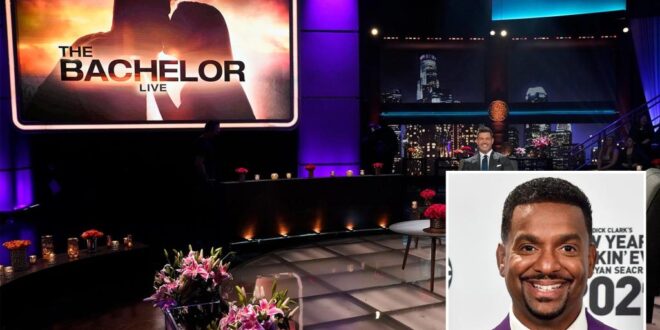 He went from dancing to dissing.

Actor Alfonso Ribeiro, who joined Tyra Banks this season hosting “Dancing with the Stars” on Disney+, took the gloves off during an interview this week with The Post, ripping “The Bachelor” for lacking lasting love and sinking “Jersey Shore” for good measure.

“My wife watches it, and I happen to be in the room,” he said of “The Bachelor” ahead of the “DWTS” Season 31 premiere on Monday. “But I don’t watch it. Because I am not watching people pretend to fall in love and they never do.”

The 51-year-old “Fresh Prince of Bel-Air” alum and host of “America’s Funniest Home Videos,” went on to explain his reasons for boycotting the franchise.

“There’s one couple that’s ever stayed married, it’s the first one and there’s been no success since,” he said, referring to inaugural “Bachelorette” Trista Sutter, who is still married to fireman Ryan Sutter, to whom she bestowed her final rose in 2003.

Ribeiro realized the obvious conflict of interest in badmouthing the franchise — which is still in the network family after it switched from airing on ABC to Disney+ for the first time this year.

“I am having Disney ABC people ready to kill me right now,” he joked. “I want to watch a show where they actually stay together. Like ‘lets go on this three month journey that ends in disaster. It will be so much fun.’”

The Bronx native also revealed he does not watch “Jersey Shore,” the MTV franchise that helped launched the career of “DWTS” contestant Vinny Guadagnino, who is from Staten Island.

“Why watch it when you can go to it? I’m from New York … how many of those guys did I know, I know 35 of them,” Ribeiro quipped.

Ribeiro, who grew up in Riverdale, now lives in Los Angeles and said he does miss the Big Apple and waxed nostalgic on his recent trip back home.

“It’s kind of nice to see New York kind of turning back into New York again, where there’s kind of a vibe and energy in the street,” he said of post-pandemic Gotham.

Previous USMNT Shares Why Christian Pulisic Is Not Playing vs. Japan on Friday
Next Meghan Markle ‘all bark and no bite’ in gender equality conversation’