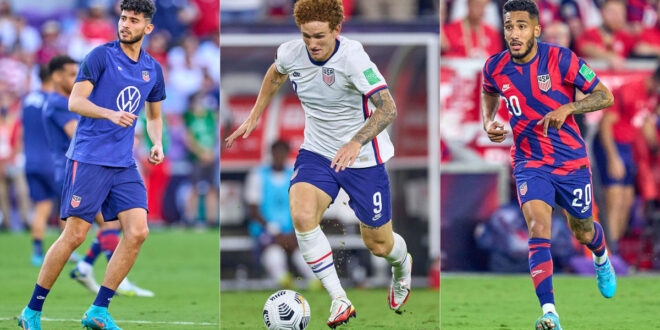 Maybe the Bundesliga just wanted to find a novel way to remind everybody that it has a title race to promote in late September. Union Berlin is, after all, the surprising leader of a league that’s often already in Bayern Munich’s hands by now. But this was an interesting way to do it—essentially criticizing a foreign national team coach for his roster selection.

“Jordan [Pefok] has contributed to more goals in the early part of 2022-23 than any U.S. international playing their club football in a top European league,” the Bundesliga website proclaimed, adding that the 26-year-old striker “deserves a USMNT recall in time for the 2022 FIFA World Cup.”

The German league’s editorial was unorthodox, but it’s an indication of just how contentious and confounding the U.S. striker conversation has become—at least outside the program. The World Cup is two months away, and there’s just one camp and two friendlies left to play before coach Gregg Berhalter has to choose his 26-man team (and then the 11 men who’ll start against Wales in Al Rayyan, Qatar).

There are other roster concerns, including at goal and center back. But none is attracting more attention and opinion than the puzzle up front. There, no one but 21-year-old FC Dallas forward Jesús Ferreira, who scored one goal in six World Cup qualifying appearances before netting four against tiny Grenada in June, appears to be a November shoo-in. As of last week, the likes of Pefok, Ricardo Pepi, Josh Sargent, Haji Wright and Brandon Vazquez were considered contenders for the remaining two or maybe three slots.

Berhalter has said time and again that this month’s camp in western Germany (where the U.S. faces Japan on Friday in Düsseldorf) and Murcia, Spain (where the Americans play Saudi Arabia on Sept. 27) is not a World Cup dress rehearsal. It can’t be. Too many important pieces, such as Antonee Robinson, Tim Weah and Yunus Musah, among others, are missing. Nevertheless, a message has been sent about the race for the No. 9 role: fit may trump form.

There’s no other way to reconcile the inclusion of Pepi, who hadn’t found the net in the 11 months that preceded last week’s roster announcement (he then scored for Groningen over the weekend), over Pefok, who’s been the most consistent American scorer in Europe. The Washington, D.C. native had tallied 21 goals between Pepi’s last marker and last week’s unveiling, and now has four in eight games for first-place Union.

Ferreira and Sargent, who hasn’t scored for the U.S. in two years, are the other strikers now in camp. Wright, who spent June with the national team and has five goals in seven matches for Turkey’s Antalyaspor, was left out. So was Vazquez, whose bid for an inaugural senior cap has been fueled by a brilliant 16-goal, five-assist campaign for resurgent FC Cincinnati.

“I don’t think there’s a case where there’s a huge talent discrepancy, and we went with the guy who has experience or has a body of work over that talent. You’re talking about minor differences,” Berhalter explained.

“We’re not going to be the most talented team at the World Cup and we’re going to have to compensate for that by being a cohesive unit, by working for each other, fighting for each other and having a great team spirit,” the coach continued. “So part of it is leaning on guys that have been there before and been around the group before, and understand the team culture and understand their teammates really well.”

Form is typically temporary, especially up top. Strikers can be streaky, for better or worse. What seems to matter more to Berhalter is profile—attributes, qualities, abilities and instincts that transcend a given stat. How the player fits into the group tactically, physically and personally is a priority.

“It’s no secret. We use [strikers] in a number of different ways,” Berhalter said when asked what he was looking for from his No. 9. “One of them is to drop in and help us give us an extra man in midfield. One of the ways is to run behind the back line and then arriving in the penalty box, making good runs inside the penalty box, and then finally starting our defensive pressure. We want to be a high pressing team. We need forwards that understand the press, know how to use triggers to initiate the press and then actually execute the press well.”

That combination of qualities is why Ferreira is atop the U.S. depth chart.

“When you look at a guy like Jesús, he checks all those boxes in terms of what his skill set is,” Berhalter said. “So that’s how we’ve been evaluating a lot of these guys, and I think that it’s a complicated position. But there are guys out there, even not in this camp, that we believe can get the job done. We said that all along, that we believe we have forwards that can do the job.”

Ferreira is smaller than his compatriots, but he’s mobile, smart and comfortable on both sides of the ball. Speaking from U.S. camp this week, he detailed how focusing on those foundational qualities can help a player produce an end product. He said he’s even been meeting with a sports psychologist to help embrace that cause and effect.

Berhalter has expressed confidence in Pepi and Sargent despite their recent struggles. Pepi’s transfer to Augsburg has been a disaster, and he’s now on loan in the Netherlands. Sargent has been revitalized by Norwich’s relegation from the Premier League, a positional adjustment and an offseason weight training program.

“Pepi has also had some good history with us. He’s started really important games, and we just weren’t willing to give all that up right now on Pepi. We still think there’s a big upside with him,” Berhalter said. “Let’s not forget in our last qualifying window, he started two of the three games in a crucial qualifying window. So he’s a guy that we’ve counted on in the past, and we want to give him an opportunity in this window.”

Berhalter said regarding Sargent, “We wanted to take a look at Josh due to his hot start and he’s been with the [national] team for a while as well.”

Norwich uses a 4-3-3 formation that’s similar to the the Berhalter’s, and Sargent earned some time up top in the absence of the injured Teemu Pukki. Sargent then returned to a right-wing role that affords him more opportunity to drift inside, he said. The 22-year-old has six goals in 11 games this season.

“I haven’t really had a season like this,” Sargent told media Wednesday in Cologne. “I would say in terms of getting a lot of scoring chances, getting minutes at striker like I have this season so far, confidence is at an all-time high at the moment. I’m just trying to keep that momentum going as long as possible, keep scoring goals.”

Wright and Pefok have fewer caps than the men called in (but not by much in Pefok’s case—he’s just two behind Pepi). Pefok also plays in a 3-5-2 at Union that’s quite different from Berhalter’s set-up. Vazquez, meanwhile, has no time with the U.S. at all, and integrating a player into the side this close to the World Cup just doesn’t seem like a task the coaching staff is eager to take on.

“We’re pretty confident we know Jordan’s profile,” Berhalter said last week. “We know what he can do, and we didn’t feel like we needed to see him in this camp to determine whether he could be on the [World Cup] roster or not. … He’s been working hard. He’s been a handful to play against, and he’s doing a lot of things right.

“We’ve been consistent in saying it may not be the best forward that is in the group,” he added. “It’s a guy that fits what we’re doing the best and again, we’re pretty confident we know what Jordan can do.”

“In the big competitions you need experience, but you also need desire and to apply yourself,” he said in that Bundesliga piece. ”In a cup competition anything can happen. Why shouldn’t performances at the highest level in club football be reflected in the national team?”

Perhaps Pefok already is considered a World Cup squad member unless Pepi and/or Sargent flourish this month. Or maybe his profile just isn’t right. Either way, the scoreboard will tell the story. First up is the 24th-ranked Samurai Blue, who are headed to their seventh straight World Cup following a qualifying campaign in which they won 15 of 18 games, scored 58 goals and yielded just six.

“They don’t give much up at all,” Berhalter said of Japan. “They don’t give many goal scoring opportunities up. They play teams very tight—very good work rate. Everyone gets behind the ball when they lose the ball. So I think that’s going be an interesting opponent.”

It sounds like a good test for a striker. It’s one that somebody will have to pass, or else questions will continue as time grows short.