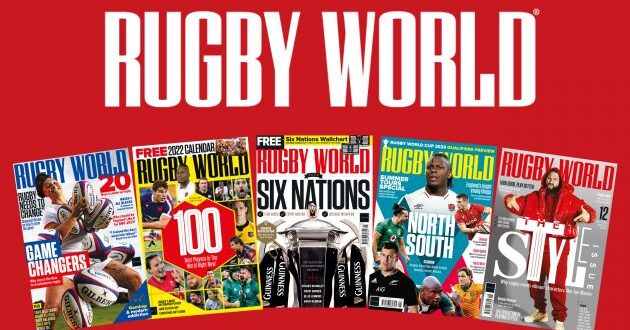 Big change is afoot at Rugby World this November as editor Sarah Mockford leaves the title after 20 years to become women’s sport editor at The Telegraph. As Sarah begins a new adventure, up steps features editor Alan Dymock to take the helm.

Having started with work experience in 2002, Sarah became a permanent staff member in 2005 and worked her way up from features editor to deputy editor, eventually taking over as editor in 2018. Sarah also became the first female chairman of the Rugby Union Writers’ Club during her time at Rugby World.

In a neat work of symmetry, Alan also began doing work experience at the title in 2012. He earned himself a features writer position in 2013 and in 2016 was named features editor. In that same year Alan was named Rugby Journalist Of The Year at the Sports Journalism Awards, and has built his reputation on long-read, investigative features.

“When Sarah told me she had accepted the role at The Telegraph it was a bittersweet moment,” said ball sports content director Mike Harris. “I’m sad we’ll be losing Sarah as she has been a brilliant editor of Rugby World but at the same time I’m proud that she’s leaving to take on one of the biggest roles in sports journalism. She will be brilliant at The Telegraph.

“I always believe in promoting internal talent where we can and in Alan Dymock we have an incredible journalist with brilliant ideas and a real eye for commercial opportunities. I know he will be a huge success when he takes over at the end of November.”

Sarah says: “It has been a privilege to work on such a fantastic brand and with so many brilliant colleagues over the past two decades. It is something of an end of an era for me but I’m excited to take on a new challenge.”

Alan says: “I have some pretty big shoes to fill – and that’s before you realise Sarah’s Twitter handle was once ‘Heels on Halfway’! But we’ve got an incredibly exciting year ahead and we have some really ambitious plans in place for 2023. I can’t wait to get going.”

The search for a new staff member at Rugby World magazine is underway with a job role live on workable. If you know a dynamic rugby content creator who wants to join an amazing brand heading into an exciting year then encourage them to apply!

Previous AOC says young people not having children because of ‘burdens of capitalism,’ more immigration is the answer
Next Florida Democrat sues DeSantis for flying migrants to Martha’s Vineyard: ‘He can’t comply with the law’