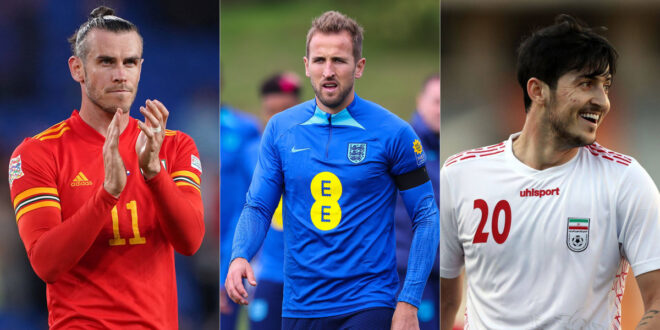 With so much focus on the U.S. men’s national team and its World Cup preparations, it’s easy to lose sight of one incredibly important side of the equation: what its opponents are doing.

The U.S.’s capacity for success in Qatar is not only down to what the Americans do, but it’s also largely dependent on how positioned for success its competition is. Like the U.S., its three World Cup group opponents, Wales, England and Iran, are also playing against Qatar-bound sides this month, with the only exception being England’s upcoming match against Italy—the reigning European champion that stunningly failed to reach the World Cup for a second straight time.

Between UEFA Nations League matches and friendlies, those three teams are gearing up just as the U.S. is, with fine-tuning and players on the bubble making their final cases for inclusion. Here’s a closer look at what’s to come for the trio the U.S. will face in November:

This month: vs Belgium, Poland in the UEFA Nations League.

The Dragons sit bottom of their Nations League group and face potential relegation to League B. That, of course, is of absolutely minuscule importance when compared to being prepared for the nation’s first World Cup in 64 years and an opening match against the Americans. The results during this window matter to a degree for Robert Page’s side, but more useful will be the time together and assessing where Gareth Bale stands in his first camp since joining LAFC this summer. He has started only twice in 11 MLS appearances, scoring two goals, but his form is less of a factor than his fitness when it comes to representing his country.

Wales won’t be operating with a full deck, with injuries to midfielder Aaron Ramsey, winger Harry Wilson and goalkeeper Adam Davies keeping them from camp and Bournemouth midfielder David Brooks not yet back in frame after overcoming a cancer diagnosis in the spring.

“In the next two games is the opportunity to use them with one eye on the World Cup,” Page said upon revealing his squad, adding that he’s not planning on springing any surprises and will rely on his veteran core. “But it’s a shame we find ourselves in this position going into two Nations League games. We could only need one win to stay in the division, but it shows the progression, we are playing against Belgium holding our own.

“We want to stay in the division, of course we do … we want to play against the best players and teams.”

The Dragons will get the chance to do just that in this window, between Belgium, ranked No. 2 in the world, and Poland, featuring an in-form Robert Lewandowski. In the reverse fixtures in June, Poland came from behind to beat Wales at home, 2–1, while the Welsh held Belgium to a 1–1 draw in Cardiff thanks to Brennan Johnson’s late equalizer. The rematches are proper preparation for a team that has its core largely intact and whose manager has the support of having signed a four-year deal to run through the 2026 World Cup—a reward for the job already done in place of Ryan Giggs, who stepped down amid domestic violence charges.

Separately, the U.S. will hope that by the time Nov. 21 rolls around, Welsh actor Michael Sheen’s World Cup pep talk (geared toward the Dragons’ match vs. England) will have worn off. But based on Page’s affinity for Sheen and his speech, that appears unlikely.

This month: vs Italy, Germany in the UEFA Nations League.

A lackluster 0-2-2 June put the spotlight on Gareth Southgate to right the ship for the Three Lions, who, like Wales, face the prospect of Nations League relegation. Two surprise defeats to Hungary sandwiched draws against this month’s opponents, the more vaunted Italy and Germany, leaving England needing results and potentially some help to avoid the drop.

But, as is the case with Wales, that’s secondary to rediscovering top form before the World Cup, and England has a multitude of issues to sort out before it can do that. It’s dealing with a litany of injuries (goalkeeper Jordan Pickford, midfielder Kalvin Phillips and forward Dominic Calvert-Lewin are all out hurt), while center back stalwart Harry Maguire is under intense scrutiny due to his drop in stature at Manchester United.

“Clearly, we have a number of players including Ben Chilwell, Luke Shaw, Harry Maguire and Kalvin Phillips who are not playing a lot of minutes with their club. It is not ideal, but we feel they have been, and can be, important players for us. It is not a perfect situation, but there is still a lot of football to be played before Qatar,” Southgate said upon revealing his squad (and before Phillips had to withdraw).

Nevertheless, with the tournament results under Southgate—fourth at the 2018 World Cup, runner-up at the Euros—comes greater expectation, and anything less than a pair of convincing performances this month will have the anxiety at home ramped up heading into the competition. As a result, Southgate has expanded his squad to 28 players in hopes of finding some solutions.

“This is a bigger-than-normal squad and part of the rationale is that we are very close to a World Cup and we feel, although our results were disappointing in the summer, we have picked on the basis of form and capability over a long period,” Southgate said.

One of the better stories among those choices is Ivan Toney, the 26-year-old Brentford forward whose call-up is his first for England at any level. That he is in camp and the likes of Jadon Sancho and Marcus Rashford are not indicates Southgate’s desire to turn over all stones and not just rely on past England performance to dictate the future.

“There were certain players we wanted to keep involved this time, but that said it doesn’t mean that this is the end for some of the others who aren’t involved,” said Southgate, who sounds an awful lot like U.S. manager Gregg Berhalter in explaining his decisions. “Marcus Rashford, for example, has shown some encouraging signs recently. He is a player we know well so if he can perform at a high level in the next few weeks, he of course will be under consideration.

“Reflecting on the last couple of months, clearly as an international manager you don’t have any games to quickly put the disappointment behind you. We have had a long period to reflect but now we are really looking forward to two high-quality matches that will be a great test for us and a crucial part of our preparation for the World Cup. It is only eight weeks until we will be naming our squad for Qatar so every minute counts.”

This month: vs Uruguay, Senegal in friendlies.

Team Melli is under new, yet familiar leadership with the rehiring of Carlos Queiroz as manager. It’ll mark the third straight World Cup for Queiroz as Iran’s coach, though he coached both Colombia and Egypt during the 2022 cycle before replacing Dragan Skočić earlier this month. So while there’s little in the way of time to assess the situation and make corrections, Queiroz’s starting point is at least considerably further along than any other new hire’s would be. Case in point: among his 27 selections for this camp are 16 players who were with him at the ’18 World Cup.

Queiroz is no stranger to American soccer, having coached the NY/NJ MetroStars (now the Red Bulls) in their inaugural MLS season and authoring Project 2010, the U.S. Soccer–commissioned effort in 1998 that was aimed at turning the nation into a world power in the subsequent 12 years.

His efforts now, as they have been at the past two World Cups, though, are focused on Iran and attempting to lead the nation to the knockout stage for the first time. Its 8-1-1 run through its Asian qualifying group was the best in the region, as was its tally of 15 goals scored, so there’s a strong foundation and a group that boasts plenty of experience—it very nearly got through a group featuring Spain and Portugal four years ago.

Uruguay, which the U.S. played to a 0–0 draw in June, and African champion Senegal will provide different kinds of litmus tests in an important window for a team that’s caught between flux and fine-tuning and just needs time as a unit to get on the same page before group play—and a date vs. England—begins.