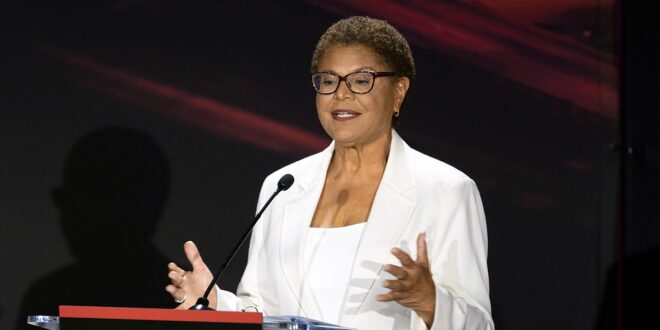 During Wednesday night’s Los Angeles mayoral debate, Rep. Karen Bass insisted that guns stolen from her home in a burglary were properly kept, and accused opponent Rick Caruso of ‘desperation’ for asking about it.

The two weapons were reported to be the only items stolen in the home invasion earlier this month, prompting City Councilman Joe Buscaino to call on authorities with questions about the circumstances. During the debate, Caruso continued the questioning.

“”We didn’t hear much about these guns, which I think the congresswoman should answer some questions about what kind of guns were they, how were they stored, was it in compliance with city law,” Caruso said, adding that “the city has a very, very detailed law.”

Bass said she was “disheartened” by Caruso’s questioning and insisted everything was proper.

“My home was burglarized, I called the police, and later they arrested two suspects,” she said. “And the storage and registration were 100% legal.”

The Democrat then fired back with an accusation of her own.

“I think this is an act of desperation, Rick,” she said, mentioning the letter from Buscaino “calling for me to be investigated for the theft that happened at my house.” 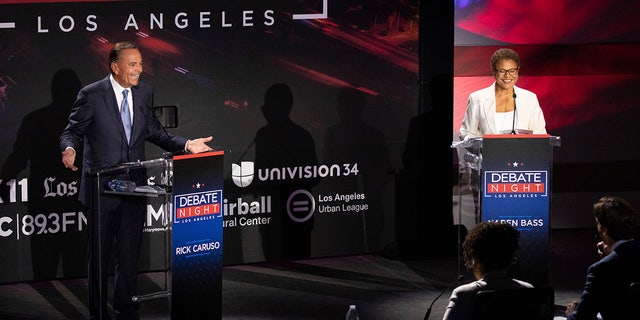 Bass then turned to Caruso and said she was “disappointed” because when his property The Grove was burglarized she called him to ask how he was.

“And instead you call on me to prove one thing or another and then the councilman calls on me to be investigated?” she asked.

Caruso said he “sympathized” with Bass and recalled that following the burglary he publicly stated that “I feel sorry for anybody, including you, for that to happen to.,” and that it is a “terrible sense of invasion.”

Still, he pressed the issue by saying that two guns are on the street now and “knowing how those are stored, it’s a simple thing to answer.”