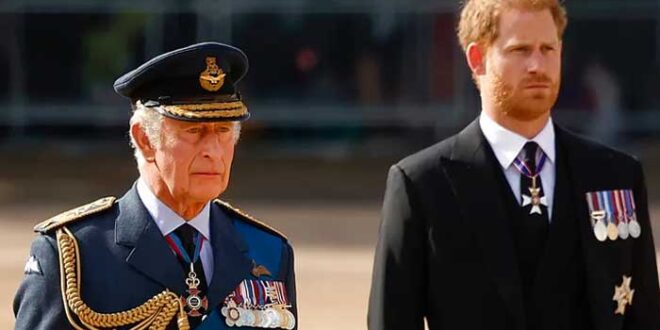 King Charles  will reportedly decide on   his grandchildren Archie and Lilibet’s titles  after Prince Harry’s memoir, as well as his upcoming Netflix docuseries with Duchess Meghan.

Royal biographer Katie Nicholl, via Vanity Fair, said Charles hasn’t made any decisions about his grandchildren’s titles just yet, saying “It depends a lot on what happens in the coming months, particularly with Harry’s book and their TV show.”

Sources close to Charles also say he’s committed to mending fences with the Sussexes, and one friend says “He is hurt and disappointed but he has always said his love for Harry is unconditional.”

The Duke and Duchess of Sussex have not  commented on the situation publicly, but a source recently told The Sun that “Harry and Meghan were worried about the security issue and being prince and princess brings them the right to have certain levels of royal security. There have been a lot of talks over the past week.”

Meghan and  Harry were said to be “insistent that Archie and Lilibet are Prince and Princess” but “have been left furious that their kids cannot take the title HRH.”

Archie and Lilibet, as per the agreement, can be prince and princess but not HRH because they are not working royals.