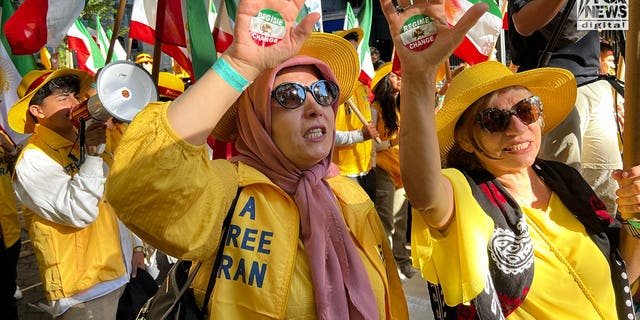 UNITED NATIONS, New York – Iranian President Ebrahim Raisi addressed the United Nations General Assembly (UNGA) with talk of “justice” and “democracy” as protests outside the U.N. and within Iran itself call for an end to a regime that many citizens say does not represent their country.

“All of the hopes and aspirations of humankind are built on justice, and they have the capacity for the creation of such a framework of all-encompassing justice, which means elimination of injustice,” Raisi said. “We are defenders of a fight against injustice in all of its forms, against humanity, against spirituality, against the Almighty, against the people of the world.”

Protests have broken out across Iran following the death of 22-year-old Kurdish-Iranian Mahsa Amini, who was arrested by the morality police for not wearing her hijab (headscarf). The police rushed Amini to a hospital shortly after she fell into a coma during her detention, claiming she had collapsed. But her family said they saw evidence of beatings.

But her death set off protests across Tehran, with hundreds protesting at Amini’s funeral, and more protests starting over the following two days. Iranian officials allegedly cut off internet service for phones and shut down social media, including Facebook, in an effort to contain the protests.

At least five protesters have died as police try to clear the streets.

Raisi, rather than address the crisis in his country, attended the 77th General Assembly despite calls from critics and survivors of the 1988 “death commission” for the U.S. to deny the Iranian president a visa to enter the country. He touted the “progress” Iran has made, using his platform to air a number of grievances against other countries.

“The Islamic Revolution in Iran was the beginning of the movement of a great nation of Iran to seek her own place in the world, and through the decades, we have been faced with foreign plots such as coup d’etats, oppressive sanctions, as well as hegemonic interventions,” Raisi said. “None of the successes of the Iranian nation have been acceptable to the great powers from the time that the first president of the Islamic Revolution of Iran.”

But many citizens of Iran do not accept that the current regime has many “successes” of which to speak. Protesters in Dag Hammarskjold Park across the street from the U.N. told Fox News Digital Raisi had no right to address the General Assembly as he does not represent the people. And Raisi was allegedly involved in the death commission, which may have killed as many as 30,000 dissidents and prisoners.

Survivors of the commission Tuesday filled the park with the photos of 2,000 of those victims and told Fox News Digital they saw Raisi and directly blame him for the deaths of their families and friends. 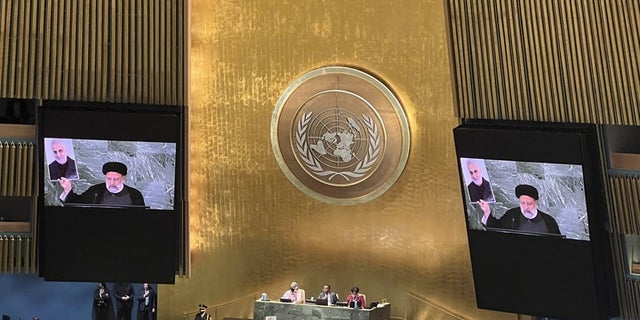 A protester on Wednesday said everyone in Iran knows “someone” who was a victim of the regime.

“Raisi is not the president of the people of Iran, and he’s a mass murderer,” Raha, an Iranian woman born in the Netherlands and living in the U.S., said. “He’s responsible for the massacre of 30,000 political prisoners … and, again, he proved how horrible and how monstrous he can be when, in 2019, he cracked down on national protests in Iran.”

Raha said that despite what Raisi said, Iran “does not stand for justice.”

Haisi, a student who moved to the U.S. with her family, spoke of the trouble her family faced and her own harrowing incident at the age of 13 when she was almost arrested for hijab law violations. 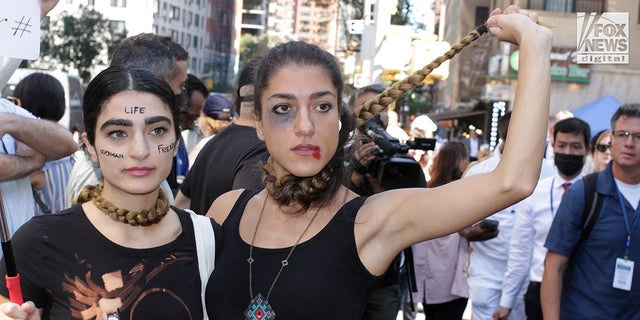 Two women vividly demonstrate their disdain for the current Iranian regime during a protest in Dag Hammerskjold Park across from the U.N. headquarters.
(John Mantel for Fox News Digital)

“I was in the streets, and I was not wearing my hijab properly, so one of the women from the vans came and took my hand and was pulling me towards the van, and finally I fixed it and stuff … But this is a very common event that happens in Iran,” Haisi said. “My friends and I were always in fear of being arrested.”

But rather than own up to these problems, Raisi instead spent large stretches of his speech deflecting and insisting that other nations must address their own human-rights issues before raising issues with Iran. He cited the dark history of Canadian boarding schools and the deaths of hundreds of First Nation children and the Israel-Palestinian conflict as examples of problems that world powers “run away from.”

“Of course, the implementation of justice and fairness is quite challenging and difficult, and perhaps it is because of that that many of those who claim to be on the side of peace, they run away from the responsibility of peace,” Raisi said. “So we say to them: Since you do not wish to carry the burden on your shoulder, do you not even wish to carry the burden of fighting against oppression?”

The Foreign Desk editor-in-chief Lisa Daftari said it’s “not surprising” to see Raisi try to blame the U.S. and its allies for allegedly “supporting terrorism.” 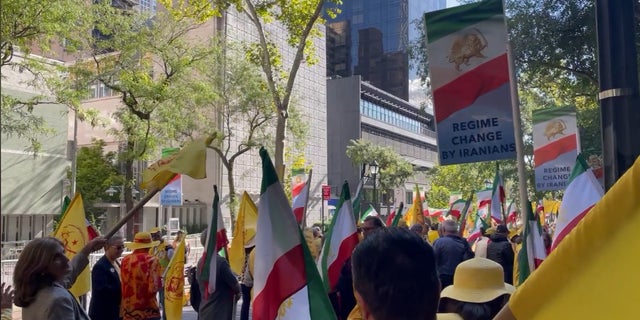 People gather in Dag Hammarskjold Park across the street from the U.N. headquarters to protest Iranian President Ebrahim Raisi, who addressed the General Assembly on Wednesday.
(Peter Aitken for Fox News Digital)

“For someone who bears the nickname “Butcher of Tehran” to travel to New York and make such accusations while the U.S. and European delegations sat and listened is truly indicative of how bold the rogue regime of Iran has become,” Daftari told Fox News Digital. “This is a man who has the innocent blood of his own people on his hands, and yet he stands at the podium spewing lies about how he believes in human rights for all.”

Daftari noted that Raisi did not advocate for his own people at all, only the Palestinian people, whom he said were victims of Israeli “tyranny.”

“Outside the doors of the U.N., something very different was going on,” Daftari said. “Protesters from around the country traveled to New York to protest Raisi’s visit and to attempt to show reporters and others passing by that the Iran regime’s brutal crimes, such as the murder of a 22-year-old girl for showing her hair, should not be forgotten in lieu of some fabricated diplomacy talk inside the U.N.”

Behnam Ben Taleblu, a senior fellow at the Foundation for Defense of Democracies (FDD), told Fox News Digital the administration missed a chance by allowing Raisi to come to the U.S.

“Failing to deny Raisi a visa, particularly after the brutal killing of Mahsa Amini, was a missed opportunity for the Biden administration to put its money where its mouth is on Iran and human rights,” Taleblu said.