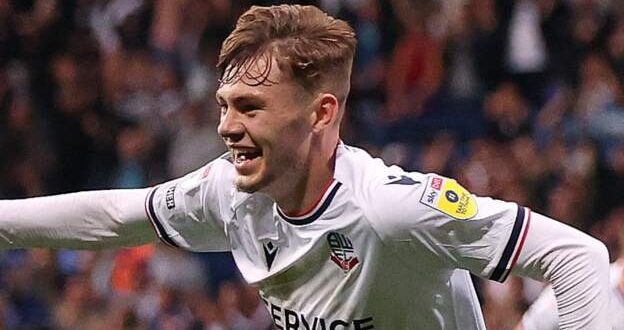 “Do you know your Fifa rating before the game is released?”

“…99 maybe,” he responds before unleashing another grin.

It’s a sign of the confidence that the 19-year-old possesses despite only finding his feet at senior level with Bolton Wanderers.

On loan from Liverpool, where he made his Champions League and FA Cup debuts under Jurgen Klopp last season while starring for the Under-23s, Bradley has made a flying start with the League One club.

With three goals and three assists this season, his all-action displays from right wing-back have earned him rave reviews from the Bolton support.

“It’s been a really good start and I feel I’m learning and developing every day. I’m just enjoying playing as many games as I can,” he said.

“That’s something I want to add to my game this season, getting in to the box and scoring a few goals. I feel like I’ve done that so far this season and hopefully I get many more.

“It’s been a step up for me playing twice a week, which can be quite difficult at times, but it can only benefit me long-term. If you were to compare me now to six to 12 months ago, I feel I am a miles better player.”

Bradley adds the loan came at the “right time” and that the move was one he had to make, even if County Tyrone native sees his long-term future with Liverpool.

“I didn’t really speak to Jurgen one-to-one, but I have received text messages from him just saying go out and enjoy it, and do your best. He just wants to see me get as many games as possible,” he added.

“We have a group there with all the loanees and they text in to it when someone scores or gets an assist, or even when you play well.

“It’s been massive that they have kept in contact and still want to know how I am doing.

“Liverpool have been great that way and I can’t thank them enough.”

‘NI prepped me for Bolton switch’

Bradley has had a whirlwind experience on the international stage thus far and has won eight caps since making his debut as a 17-year-old in May 2021.

Northern Ireland will end a difficult Nations League campaign at home to Kosovo and away to Greece. Ian Baraclough’s side are bottom of League C Group Two and have yet to win any of their 14 matches in the competition.

However, a bright point under Baraclough has been the introduction of young talents such as the highly-rated Bradley.

“You can see things are developing and performances are getting better. Hopefully the results will come with that, too.

“We keep believing in what we’re doing. We will just keep working hard. You always go through a tough spell as a footballer.”

Bradley added playing for Northern Ireland prior to his senior club debut helped him adapt to the physicality of men’s football.

“It’s been a massive challenge. Obviously I am not used to that playing U23s football with Liverpool.

“Stepping up and playing against proper men has been difficult, but it’s something I’m getting used to and I’m improving every week.

“Playing senior football for Northern Ireland, and in front of fans, has been a big benefit.

“It helped me prepare for situations and first-team football. It was a massive help.

“I want to bring that momentum and confidence with me in to the Northern Ireland squad. Hopefully I get the chance to play a couple of games.”

‘My family keep me grounded’

Despite his superb start to life at the University of Bolton Stadium, there appears little danger of Bradley getting swept up in his own hype.

“I feel like with the family I have behind me it’s easy to keep my feet on the ground, they make sure of that. It’s not too hard, to be honest,” he said.

“There’s always going to be that bit of pressure but hopefully I’m able to keep producing good performances.”

Players also ensure the youngster remains grounded, including Bolton and Northern Ireland team-mate Dion Charles who believes he has “all the tools to go on and have a very successful career”.

“I’ve been winding him up the past few days,” Charles joked about Bradley spurning a gilt-edged opportunity in Saturday’s win over Peterborough after being played in by the striker.

“There was actually another one later on in the game where he has mis-hit it and said to me, ‘I’ll have to cut you a bit of slack, it’s harder than it looks’.

“He has been great for us. He has been scoring goals and playing well.

“You know the movements they make and where they want the ball, so me and Conor have quite a good relationship.”