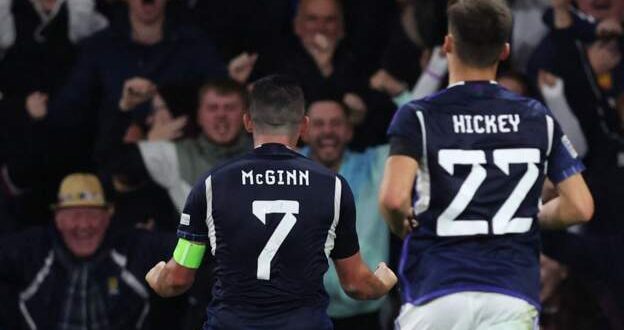 Scotland 3-0 Ukraine: How Steve Clarke’s side spurred on by summer of hurt

After a remarkable Scotland performance at Hampden, the message from captain and manager was in unison. “The summer hurt us badly,” John McGinn said, with Steve Clarke adding that “the players suffered more than anybody”.

Wednesday’s Nations League encounter with Ukraine was not just about leapfrogging the visitors at the top of Group B1. It was also about proving that this Scotland side are one that can bounce back. And, boy, did they manage that.

Three months on from an optimism-sapping World Cup play-off defeat, the Scots turned over the same opposition in stunning fashion at Hampden with a much-deserved 3-0 victory.

“Sometimes you need to respond in football,” Clarke told Premier Sports. “It’s nice that we’ve responded in this way.

“We did a lot of work in the short period we had, a lot of it very boring work in the lecture room, and they obviously took it all on board. They were excellent.”

When the Tartan Army belt out their ‘Super John McGinn’ anthem, there is of course an element of tongue-in-cheek when it comes to the line about the Aston Villa captain being ‘better than Zidane’ – even if some of them believe it.

What there is no doubt about, though, is the line that comes just before it – ‘he’s Stevie Clarke’s man’.

The former Hibernian and St Mirren midfielder is just one game away from half a century of caps. In the first of those 14 appearances under Gordon Strachan, Alex McLeish and Malky Mackay, McGinn failed to score or assist.

In the following 35 games under Clarke, the 27-year-old has had 20 goal involvements – scoring 14 and assisting six – which is 12 more than any other player.

With Callum McGregor and Scott McTominay deployed as a double pivot in midfield in a refreshed 4-2-3-1 system, McGinn was given licence to roam behind Che Adams and use his infamous backside to his advantage by scoring the opening goal.

He also managed more shots (six) than any other player on the pitch while registering seven touches in the opposition box and creating two clear-cut chances.

McGinn’s grit and endeavour is what endears him most to the Scotland support, though, and that was evident again at Hampden as he won 10 of his 14 duels and gained possession back in the final third five times.

“We got back to doing what we do well, being horrible to play against and showing desire,” McGinn told Premier Sports. “We know we’re a good team and we owed the supporters, the manager and most of all ourselves a performance like that.”

A bold change of system, which ultimately paid off, and a much-improved all-round showing in comparison to the summer performances standout as the main positives.

That was highlighted in the performance of Brentford right-back Aaron Hickey, who replaced the injured Nathan Patterson in the first half, and the goalscoring cameo of Lyndon Dykes, who became the first substitute to score a brace for Scotland since Chris Burke against Bulgaria in May 2006. 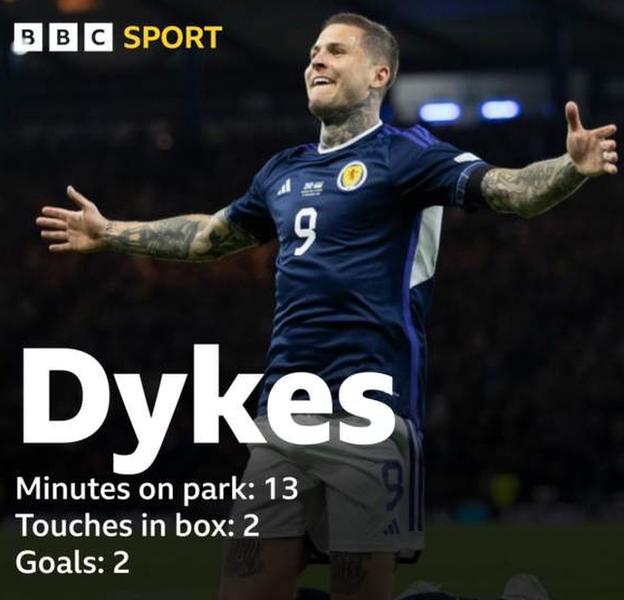 Ryan Fraser, who assisted both Dykes’ headers, also made an impression off the bench, despite both having “the hump with the head coach,” as Clarke mischievously said.

The two pinpoint headers take Dykes’ Scotland tally to an impressive eight goals in 23 caps, and the forward has given Clarke a decision to make with the Republic of Ireland to come to Hampden on Saturday.

“I was disappointed not to be playing, but I came on and changed the game,” Dykes told Premier Sports. “For Scotland, my goal record has been good.”

A lot of the “boring work” Clarke referenced might have included hours of set-piece drills. Both Dykes’ headers came as a result of two Fraser corners, and both squad and manager were keen to praise former Hearts coach Austin MacPhee.

MacPhee specialises in set-piece training with both the national team and Premier League side Aston Villa, and Clarke hailed his impact, stating that “the boys are listening to what the movements should be”.

“Credit to Austin,” Dykes added. “He’s been very good since he’s come in. When I came on he told me to go front post. I went front post twice and scored two.”

“Shout out to Austin,” Arsenal left-back Kieran Tierney said. “We had a few meetings on that. You don’t have much time to work on it but the preparation he puts into it is brilliant.”

Previous Dems reject GOP investigation into safety of unaccompanied children at the border: ‘Completely unnecessary’
Next Ted Lasso’s AFC Richmond to Be Included in FIFA 2023 (Video)