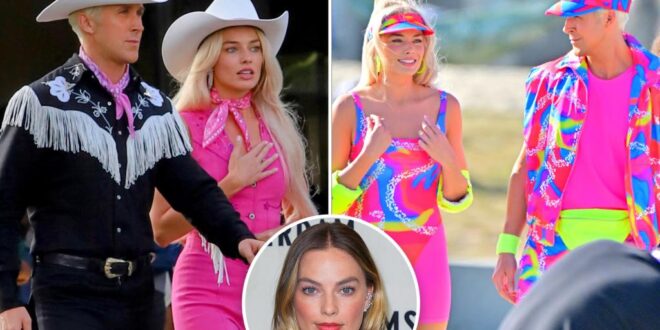 Life in plastic was not fantastic.

“Barbie” actress Margot Robbie said she was “mortified” after photos from her new film were leaked onto the internet, which drew hundreds of people to the set and inspired the look of summer 2022: Barbiecore.

“I can’t tell you how mortified we were, by the way,” Robbie, who is playing the iconic Mattel doll, said Tuesday on “The Tonight Show Starring Jimmy Fallon.”

“We look like we’re like laughing and having fun, but we’re dying on the inside. Dying. I was like, this is the most humiliating moment of my life.”

The photos, which captivated the internet for several weeks, were snapped by the local paparazzi and caused hundreds of people to flock to the movie set.

“I mean, I knew that we had some exteriors to shoot in LA. I knew, OK, once you were doing exteriors, you’re gonna get papped. There’s probably going to be a little crowd of people who are going to stand out, because, you know, we stand out a little bit in those outfits,” Robbie said.

“So I knew there was going to be a little bit of attention, and probably some photos would get out there, but not like it did. It was like mad. It was like hundreds of people watching.”

The “Wolf of Wall Street” actress stars alongside Ryan Gosling, who plays Ken.

“It’s not what you think it is, unless it is,” said Gosling.

“And then you know what it is, but I don’t think that’s what you think it is.”

Many details of the plot remain under wraps; however, there is a rumor that the plot will include several different iterations of Ken and Barbie.