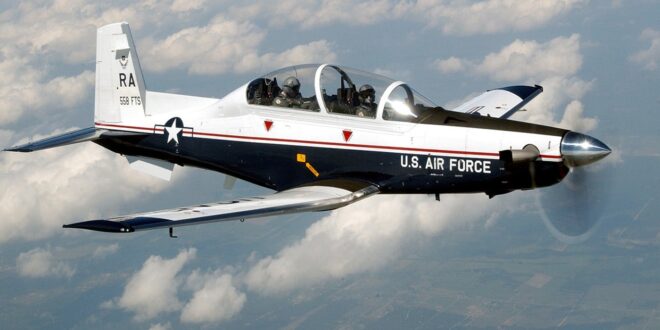 Biden declared the pandemic over, but unvaxxed Air Force pilots are still grounded

Despite President Biden’s assertion that the COVID-19 pandemic is “over,” unvaccinated Air Force pilots seeking religious accommodations to the vaccine mandate are still being prohibited from flying, despite those with medical exemptions being able to perform their usual duties.

The president’s statement comes amid an ongoing class action lawsuit at the 6th Circuit Court of Appeals to grant relief to over 10,000 unvaccinated active duty, reserve, and National Guard Air Force and Space Force members who submitted a religious exemption to the Pentagon’s vaccine mandate and were denied or are awaiting a decision. Most recently, the 6th Circuit ordered the Air Force to halt “disciplinary or separation measures” taken against the class while the lawsuit continues.

The Air Force told Fox News Digital through a spokesperson that the agency is complying with the 6th Circuit injunction to pause penalties against unvaccinated service members.

“The Department of the Air Force is complying with the court order to pause all disciplinary and adverse actions for those refusing the COVID-19 vaccine who submitted a timely religious accommodation request,” the spokesperson said. “This includes the Air Force Reserve Command processing Airmen to the Individual Ready Reserve.”

However, plaintiff attorneys say that despite the injunction, there is ongoing discrimination in assignments and operational decisions against unvaccinated Air Force members.

Attorney Chris Wiest told Fox News Digital that language contained in the Supreme Court’s order in another case on behalf of unvaccinated Navy SEALs seeking religious accommodation created an exception that the Air Force is using in order to keep pilots grounded.

The Supreme Court said in March that the U.S. military has broad discretion to make “deployment, assignment, and other operational decisions,” which gave the Navy, and now extended to other branches of the military, the ability to use vaccination status as a factor in deployments and duty assignments.

As a result, the recent 6th Circuit injunction has made no difference for the fates of grounded pilots, Wiest explained, because unvaccinated Air Force members are still having their assignments pulled or suspended all within the exception that the Supreme Court created in the Navy SEAL case. 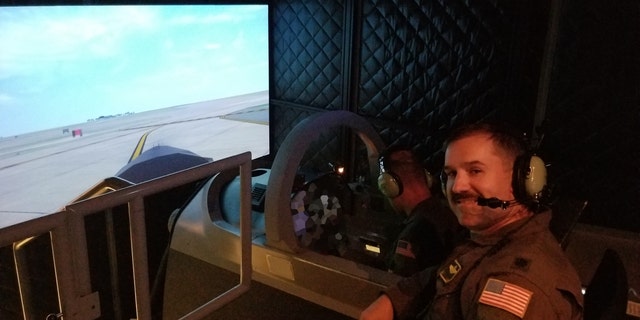 Andy Grieb, a T-6 instructor pilot, is one plaintiff in First Liberty’s case who has been grounded from flying and ordered to instruct in a simulator (pictured here) by the Air Force because his religious accommodation request was denied. (First Liberty Institute)

“This will eventually lead to thousands of Airmen losing their careers because they will eventually be unable to promote to the next grade. There is nothing operational about these decisions, especially in light of the president announcing that the pandemic is over. In fact, this is grave threat to our national security that should alarm every American,” she continued.

Andy Grieb, a T-6 instructor pilot, has been grounded from flying by the Air Force because his religious accommodation request was denied. He told Fox News Digital that he serves as the initial pilot trainer for brand-new lieutenants and has been doing the job for 10 years and has been a pilot for 21 years and loves it.

AIRMAN SLAMS MILITARY VACCINE MANDATE: RELIGIOUS FREEDOM ‘SHOULD BE A GIVEN’

Last October, Grieb filed for a religious exemption to the mandate, knowing he had antibodies due to having COVID-19 early in the pandemic and also a deeply held religious objection to taking the vaccine. He called the Air Force process “archaic and disorganized.” His initial exemption request was denied in January, and his appeal was issued a final denial of appeal on May 4.

Grieb was initially not allowed to work or earn retirement credits at all after May 4 until the 6th Circuit preliminary injunction at the end of July. Ever since then, he has been grounded from flying and tasked with instructing Air Force students in a simulator, which he never would have done before.

He said that he is “extremely frustrated.” Grieb continued, “I don’t know a single pilot that wants to do something that’s not flying. I mean look, we do it because we love to fly. At least I do. I love to fly.”

He noted that his colleagues who received medical accommodation requests to the vaccine are able to fly, while those who submitted religious objections are not able to do so. Another issue that he now faces is trying to be able to maintain flight qualifications in order to progress career in the Air Force, without getting his flight hours or experience.

“Unvaccinated individuals that have a medical exemption are continuing to fly, whereas the ones that, like myself, have requested religious accommodation when it was denied. We are not allowed to fly,” he said.

Furthermore, he said that when he’s flying in a government airplane, he is wearing safety equipment including an oxygen system that is not mixing environments with the students he is teaching. But inside the simulator, he’s in much closer quarters with the students without protective equipment.

“The Air Force is losing out on a valuable resource, which is the instructors that are not teaching right now or doing their mission. In addition to that, we have to maintain our qualifications in the Air Force in order for a career to progress. So the flying duties are the qualification,” Grieb explained.

The Air Force spokesperson did not respond to Fox News Digital when asked why pilots who requested medical exemptions to the vaccine are able to fly, while those seeking religious accommodations are not. 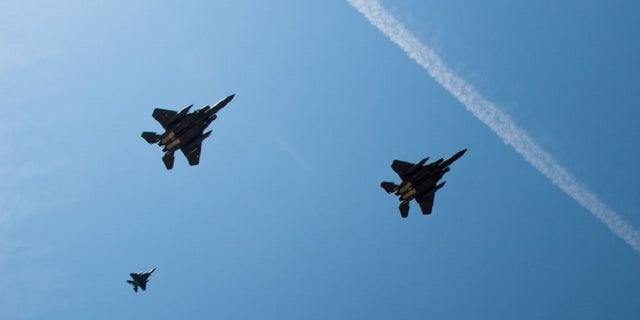 The mother of one Air Force pilot included in the class action told Fox News Digital that her son’s close to 18-year career as a fighter pilot has been taken away, as he has been grounded over his religious objection to taking the vaccine. She called it a waste of taxpayer dollars to ground her son, a highly trained and decorated pilot.

Rep. Don Bacon, R-Neb., a retired Air Force brigadier general, told Fox News Digital that he has been in contact with many service members who have encountered similar issues.

“I’ve been in direct contact with many service members over the last year – including many from Nebraska – who have legitimate concerns about the way the Pentagon has handled the processing and disposition of their requests for religious and medical exemptions,” said Bacon.

“Orders are orders, and I received every vaccine known to man when I served in uniform, but maybe it’s time to reassess this particular order. Based on the president’s recent statements on the pandemic, I’m personally not convinced we’ve struck the right balance between military risk and the Constitution. We need to consider the serious recruiting and retention problems now facing the military, and review actions taken against those who did not get the vaccine,” Bacon continued.

“We found a trend of generalized assessments rather than the individualized assessment that is required by Federal law and DoD and Military Service policies,” he continued in the report, issued to the secretary of defense.

Attorneys tell Fox News Digital that they have not heard anything out of the Air Force with respect to the memo, and they have no reason to believe that the agency will reverse course. However, they say that the IG is holding the Air Force’s “feet to the fire” and will hopefully lead to greater transparency.

“The Air Force is trying to drive out people who have strong religious beliefs,” summarized Wiest.

The White House referred Fox News Digital to the Department of Defense.