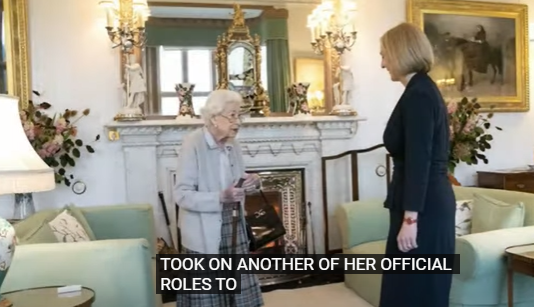 Wilford, good morning to you.

Yes, good morning, guys. Yeah, this is clearly a hugely striking moment and so moment for the nation. Two big reasons for that.

We have got an official statement from Buckingham Palace that confirms she is under Manchester, the Queen is under medical supervision.

And that her doctors are concerned for her. We haven’t had that sort of statement before through all of her mobility issues, for example.

And, of course, as Jenna was just.

Saying, that significant members of the family have traveled to be by her side. Prince Charles and Camilla initially, Prince William, the immediate in line to the throne, traveled to be with her. And that has been confirmed by their individual households as well. So it is clearly a serious situation. And you could see the seriousness of it, in fact, in the House of Commons, in Parliament, where a debate had been going on as the news did start to spread. And we did get that sentiment summed up by the new Prime Minister, Liz Truss, who said, the whole country will be deeply concerned by this news. She said, My thoughts and the thoughts of the people across our United Kingdom are with Her Majesty the Queen and her family at this time. Now, the last time, of course, we saw her was just two days ago on Tuesday when it was also the first time we’d seen her in some.

Time, when, of course, she took on another of her official roles to appoint.

The new Prime Minister Liz Truss shows her ongoing commitment to her duties at all times. And she did look frail two days ago.

A lot of people commented on that at the time, but she also looked.

Positive and happy and that was, of course, good to see. But Liz Truss, the new Prime Minister of just two days, said her thoughts and the thoughts of the people of the United Kingdom are with Her Majesty the Queen at this time.

Wilfred, you raise an interesting point there, because that was Tuesday in terms of a timeline here. Here’s the 96-year-old Queen welcoming, receiving the new Prime Minister, and also saying goodbye to her predecessor as well, Boris Johnson. Do we have any idea what happened between that meeting on Tuesday and what’s led to this tremendous concern for her health now?

Yesterday, we did get a hint that her condition had worsened in those 48 hours because a meeting of the Privy Council that was due to be held remotely over Zoom was canceled so that she could rest. And clearly, overnight things have worsened such that the palace has decided to act proactively and release a statement, the one that we mentioned earlier. Following an evaluation this morning, the queen’s doctors are concerned for her Majesty’s health and recommend she remained under medical supervision. So we haven’t got more specifics about what happened during that time. I think, as I sort of mentioned, Craig, the thing I would say is it shows a remarkable commitment she has always had to deliver on her duties. And chief among that, of course, one.

Of the chief roles, the monarch has.

Is to appoint the prime minister. And she did that despite clearly feeling a little unwell over the last couple of days, appointing her 15th prime minister in Liz Truss Wilford.

Can I ask you just quickly, one more question? Jacob just talked to you just heard him talking to Jennifer Shaker, and she.
Knows what it’s like to deal with grief publicly, and she has a unique perspective.

But I also think that you also offer a unique perspective, just as a man and as a citizen there.
How are you wrapping your mind around this? Look, she’s 96 years old, and she’s done very well.

And we’ve known, goodness forbids, that at.

At one point she would be ill like this. But how are you dealing how are you wrapping your mind around this moment?

As I said at the top, I was trying to think of the right word.

And I think we’ve just been able.

To celebrate at the Jubilee her wonderful rain.

And that’s still the mode that we’re.

In at the moment, despite the sobering tone, destroyed the striking tone. We know that she’s not well, but that’s as far as it goes, and we wish her a very speedy recovery.

All right, thank you, Wilson, for your time this morning. And stay with NBC News throughout the day for the very latest on this.

Story and much more.

Head here on the third hour of Today.

We’ll be right back.

Hey, thanks for watching our YouTube channel. Find your favorite recipes, celebrity interviews, uplifting stories, shop our favorite deals, and so much more with the Today app. Download it now.